It was a longish voyage from Adelaide to Hobart (yes, I know, our ancestors would disagree!)  so we had a combination day with genealogy and then some sight-seeing after our arrival in port at 2pm.

I loved arriving by sea into Hobart because it brought to mind that Mary O’Brien had probably come this way before me, back on 4 April 1853. Just imagine the relief of all those on board the Florentia after four and a half months at sea, with a diminishing supply of provisions. Hobart is such a pretty town with its encircling hills and Mount Wellington towering over the city. It may not have the drama of Sydney’s sandstone cliffs but it has an amiable, welcoming vibe. I could happily live in Hobart but that wouldn’t be an improvement on the remoteness of Darwin, and my heat-loving tropical friends would simply refuse to visit. It must surely have been appealing though to the immigrants from Ireland, England and Wales on board the Florentia.(Apologies to my mates who are heartily sick of Mary O’Brien from County Clare).

It was a public holiday for Regatta Day as the captain brought his huge ship to dock at the wharf. Little boats were skimming round the harbour but my friend Sharn and I chose to head off along the wharf to Salamanca Place and Battery Point for some sight-seeing. Having decided to stop for a coffee, we joined other Unlock the Past Cruisers for a chat at a local coffee shop.

But first there was some genealogy while still at sea:

GeniAus (Jill Ball) hosted this Panel on Ethics which got good feedback from the audience. The panel was Kirsty Gray, Maria Northcote and myself and Jill had prepared a range of pertinent questions for us to respond to in turn. It was interesting to see the consistency between our responses …and there’d been no prior consultation or discussion. (if anyone has thought on the session I’d be very interested in hearing your thoughts on the panel – difficult to retain it all while in the thick of it) 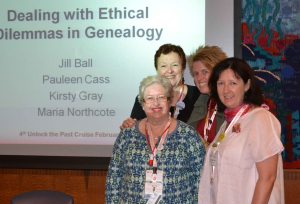 Chris Paton again unravelled the complexities and variability of Scottish records with his talk Scottish marriage: instantly buckled for life. Scotland may be (currently) part of the UK, but Scottish family history is really not the same as that for England, make no mistake! Among the warnings Chris issued is that people only needed to have a witness to their commitment and the marriage was a valid one, and also the the (wonderful) ScotlandsPeople only has marriages for the Church of Scotland and the Roman Catholic Churches. If you can’t find your ancestors you may wish to follow up the Statistical Accounts to see which other denominations were active in their parish at the time.

After arrival in Hobart people scattered to their various activities and plans. I was fortunate to spent a few fun hours with fellow genie and photo obsessive, Sharn from Family History 4 U. Some of my photos from the day will eventually make it to my photo and travel blog Tropical Territory and Travel which has been sadly neglected of late, like other things. Although the weather looked a little precarious in the beginning it turned into a magnificent afternoon with crystal clear vivid blue skies.

The day finished with a very good fireworks display over the harbour, with resounding toots of the ship’s “horn” in thanks for the display. It certainly gathered the crowds on the high decks and afterwards I was invited to join my table-mates, Cathy and Dot and friend Maria in the cocktail bar on Deck 14…a very pleasant end to the day. 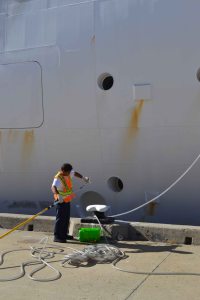 Day 8 was another full day in port and imagine our surprise to look out from the verandah and see another cruise ship had arrived overnight. It was interesting to see that life at sea involves little down-time for the crew who were busy painting any blemishes on the ship’s hull.

My priority for Day 8 ( a shore day) was to hit the archives in Hobart although initially I’d hoped to go to the Cascade Factory. However that was superseded by following up all possible leads on the Florentia and whether they would offer any further clues to whether Mary O’Brien was on board as an unassisted immigrant when the ship sailed into Hobart. Despite searching a range of pre-ordered documents, the answers were still ambiguous by the end of the day. My research outcomes re the Florentia will be the subject of an upcoming post.

And so we sailed from Hobart Town with my thoughts reflecting on whether Mary O’Brien and her sister Bridget were similarly sorry to leave this pretty place behind to head north to Moreton Bay, or in my case, to Sydney Town.