Once again GeniAus has spurred us on to consider our geneachievements for 2014 and Accentuate the Positive. It’s all too easy to be daunted by the tasks ahead, or the (perceived?) deficiencies in our past year of research. It has made me realise that I achieved more than I thought – I tend to be a girl with a half-empty glass. Thanks Jill for encouraging us.

6.  A geneasurprise I received was finding the clues which led to identifiying that Bridget O’Brien almost certainly arrived on the Florentia….it’s only taken 27 years to find a clue. Thanks Trove! I was also surprised to discover that George Kunkel had all his assets sold, possibly why they ended up following the railway line.

I had another railway geneasurprise when we visited Poperinghe station to see where my grandfather was stationed during World War I. In a WDYTYA moment, a railway worker spoke to us and provided me with print-outs of photos from that era. Our tour guide was more astonished than I was.

7.   My 2014 blog posts that I was particularly proud of was the stories about the Florentia. You can read them here, here and here and the one that started it, on 29 December 2013.

8. My 2014 blog post that received a large number of hits or comments was….my blog likes went up, my comments went down, possibly partly because I’ve been a neglectful commenter lately. Probably the best was my 5th blogiversary post recently with my goals and reflections. In a more general context I was proud of my Three Rs of Genealogical Research on the collaborative Worldwide Genealogy blog in September…it attracted lots of interest.

We also seemed to have a bit of fun with my Australia Day Geneameme and the National Family History Month Geneameme. Thanks everyone for joining in! I also had fun, along with many others, doing Sharn’s Christmas geneameme.

9.  A new piece of software I mastered was…not sure I did. Even though I’m using Evernote a lot now, I’m quite sure I haven’t mastered it. I bought the offline version before we went travelling and it was pure gold for keeping track of documents, travel arrangements etc.

10. A social media tool I enjoyed using for genealogy was Pinterest, when I just want a chill-out and fun. I’m enjoying Facebook far more now I’m in touch with my genimates.

11. A genealogy conference from which I learnt something new was all the sessions on the Unlock the Past cruise in February 2014. You can read my synopses here. 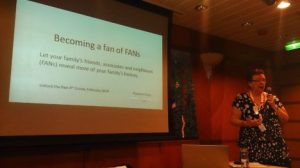 12. I am proud of the presentation I gave on the UTP February Cruise. The subject was Becoming a fan of FANs which the attendees told me they really enjoyed. You can read my presentation slides here. I also really enjoyed Jill Ball’s “fireside” chat where people shared their favourite books.

15. A genealogy book that taught me something new was…I have downloaded lots of genealogical Kindle books which I’ve started but many are still only partly read. When I take time out to read I tend to read frivolous crime novels etc so discovering Steve Robinson’s and Nathan Goodwin’s genealogical mysteries was a treat. I was also astonished to find references to what looks like my Callaghan family from Courtown, Wexford in the book Sam Reilly: Ace of Spies which has lots of geneadata to be followed up in the Irish parish registers.

16. A great repository/archive/library I visited was the Tasmanian Archives and, as always, Queensland Archives, where I did a lot of preparation for my talk on hospitals for QFHS on Accidents, Illness and Death (not one of my most successful moments in 2014 – needs a major revamp).

17. A new history book I enjoyed was Hugh Dolan’s 36 Days which tips our inherited ideas on Gallipoli on their head. As we were visiting Gallipoli mid-2014 I also read Matt McLachlan’s Gallipoli: the Battlefield Guide and Peter Pedersens ANZACs on the Western Front and Fromelles.

18. It was exciting to finally meet lots of my genimates on the UTP cruise as well as a new cousin in Melbourne. I was also pleased to spend time with other genimates on shore during the year, as well as meeting Angela from The Silver Voice in Brisbane.

19. A geneadventure I enjoyed was going cruising for the first time with a bunch of mates following our genie-obsession. On ship or on shore, we had a ton of fun!

20. Another positive I would like to share is how our Kiva Genealogists for Families’ loans have grown as the repayments have been reinvested. Over Christmas I roped in my two older grandchildren and got them to help me to make December’s loans. I will make a habit of this over 2015 to try to teach them about giving to those in need.

I originally omitted to mention Alex’s inspiration to revamp our blogs during the year. Thanks Alex (aka Family Tree Frog) for giving us a nudge to do this and Susan for reminding me to mention it. You can read what I did to mine here.

I was also very pleased to be listed in Inside History’s Top 50 blogs again in 2014 and consequently earning an entry in their Hall of Fame. This was topped off by being voted in as a Genealogy Rockstar again in 2014, even though I think there are many other equally good geneabloggers out there in the geneaworld.

4 thoughts on “Accentuate the Positive 2014”