I am participating in the A to Z 2012 blog challenge throughout April. My theme is a genealogical travelogue or a travel genealogue (I’m not sure which).  Today I get to talk about some of my favourite L places.

L is for Loch Fyne

Do you think there’s a statute of limitations on how time-distant a place can be and still tug at your heart strings and speak to your DNA? Although I’ve visited lots of my genealogical heritage places and walked the land, there are only a few that truly make me feel like I’ve come home. Dorfprozelten in Bavaria comes close because the history is so close to the surface, but language and cultural difference stand between me and that feeling of home-coming.

Loch Fyne in Argyll is that home-place where I can truly feel my roots deep into the land and scenery, and as I stood on its banks one day, that realisation came to me so clearly. I may identify more with the Irish people and love its scenery but it’s the sparseness of the Scottish highlands that call my name.

Scattered along the shores of Loch Fyne are family places: Ardkinglas and nearby Strone where James McCorkindale and family lived; Cairndow where Isabella Morrison McCorkindale is buried; and Strachur where my Morrison ancestors lived back into the C18th. Inveraray, home of the ruling Campbells, is pivotal to anyone who lives in the vicinity, including my McCorkindales (earlier aka McCorquodales, various spellings). I love that when I feel the smoothness of a timber egg from the Ardkinglas Tree Shop I have a long-distant link to my ancestor who worked on this estate.

L is for Loch Awe

View over Loch Awe from Kilchrenan side © P Cass 2010

Loch Awe is another place which calls to my heart. Just over the hills from Inveraray my earlier McCorquodales lived along Loch Awe for what was probably centuries, later apparently moving from the parish of Kilchrenan on what is called the northside (though I think of it as west) to Inishail on the southside. There is something soothing about being on either side of the loch, despite what I know of its blood-thirsty history. In fact this northern end of Loch Awe was traditional country for Clan McCorquodales, centred on nearby Loch Tromlee, land-locked in Kilchrenan parish. I’m quite sure that my own McCorquodales are minor members of the clan, but equally I’m reasonably confident that they lived hereabouts for many years. 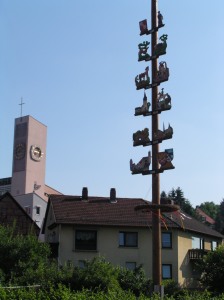 The history of Laufach is told on the carvings on this pole (don't know its correct name). © P Cass 2003

My love of ancestral places doesn’t quite extend to Laufach, pleased as I was to visit. Its railway role should have made me feel at home but it didn’t, making the town feel rather industrial. However I’m certainly indebted to the local historian from Laufach, also a descendant of the Kunkel family, who provided me with an ancestral pedigree stretching back many generations into 17th century. Our language barriers proved a challenge to real communication as he spoke little English and my German really wasn’t up to what was needed.

L is for Limerick

Although my O’Brien family were from Broadford in east County Clare, they belonged in the Limerick Union. Had the Famine driven them to a workhouse, which mercifully they weren’t, it would have been to Limerick Workhouse they’d have been admitted. As part of my east Clare research I spent some time looking at the early 1850s Board of Guardian minutes to learn more about emigrants to Australia who may have left the workhouse. Murphy’s Law being at work, these records are now online and you can read more here.

I think it’s almost certain that Mary O’Brien and her sister Bridget would have visited Limerick at some point and may even have transited through Limerick on their migration to Australia.  The Silver Voice blog has a wonderfully descriptive tour of Limerick here. My own photos of Limerick have vanished somewhere so no pics from me I’m afraid.

L is for London

We loved the interior of St Saviour's, Southwark where my husband's Cass ancestors married. It seemed quite simple despite the decoration. I know, makes no sense. © P Cass 2010

At different times I’ve had quick flits into London to read old census microfilms, or pull down the BDM registers in those pre-digital searching days, or a one-day visit to the National Archives. However the horrendous pound-dollar exchange rate ensured these were never going to be long stays.  Thankfully on our last visit the Aussie dollar was strong so a visit of a few days was possible. This time we played the tourist and were able to investigate some of my husband’s family history sites on the south bank of the Thames including St Saviour’s at Southwark. While I know I have some London ancestry, I’ve not found much about the specific locations so I gave myself permission to just go out and have fun!

L is my wish for a winning Lotto ticket…

It’s a bit of an Aussie pastime to plan what you’d do if you won the Lotto. Imagine the fun that could be had in all these heritage places, visiting the sites and spending days weeks in archives. Oh well, one can but dream!