This week’s Sepia Saturday theme was a “gimme”. I’ve had this photo strip for ages but have never used it because I felt it made my grandfather look a little gormless.

However it’s a perfect match this week, so here is Dinny strolling through Brisbane city probably in the 1920s or 1930s (the car would be a clue for some, but not me). I can’t even pick which street he’s in, but there’s a barber pole in the background, so perhaps it was George St. Perhaps he’d even been to have a haircut himself and was feeling pretty spiffy.

He’s got one thumb tucked into his waistcoast pocket and his hat angled so he keeps the sun off his face, but then he has to tip his head to see….not so wise Grandad. I don’t think he’s coming from work as he looks dressed for the day out, not in railway attire, though as a guard he would have been more smartly dressed than in some other roles.

Looking at his shadows he’s got it falling straight behind him, so I’m thinking he’s walking on an north-south street, so perhaps it is George St down near Roma Street station. (What do you think of my directional theory?) With this in mind, I went searching our good friend Trove for images of George Street, Brisbane circa 1920 and, by jove, I do believe she’s got it! 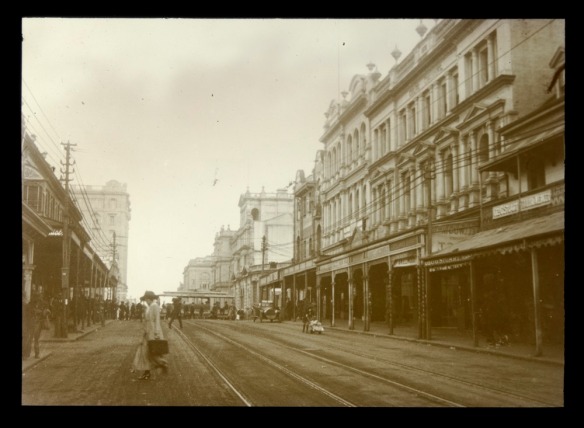 Can you see the barber’s poles and the verandah on the building opposite? Thanks to the magnificent old sandstone buildings, which remarkably for Brisbane, still stand, I know exactly where this is. The lady in the image is crossing the street to the lane which runs behind where Alan & Stark’s shop was, between Albert and George Streets (patriotic lot, with our CBD streets named for royalty!) 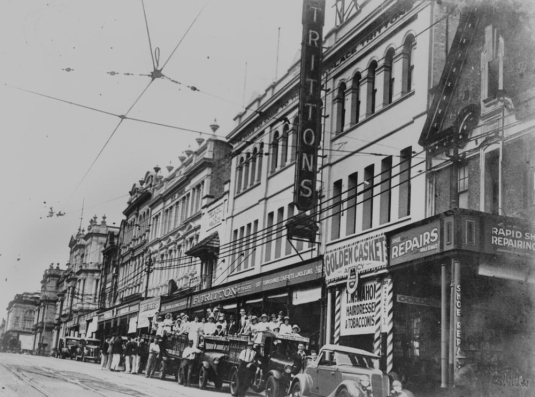 Grandad would have been walking out of the frame on the bottom right of this image heading towards Roma Street Station. If my memory serves me correctly, the old Trittons furniture store was on the right hand side before the barber’s. And above I’ve found an image from Trove which confirms my theory, and we now know the barber/hairdresser was a T McMahon. 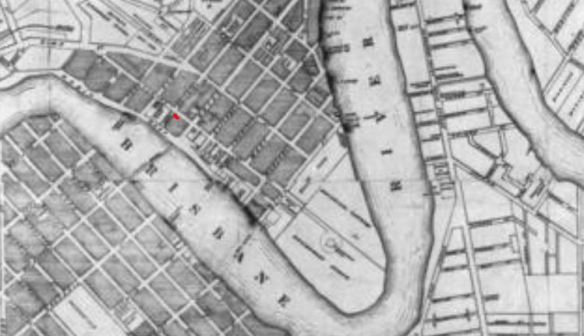 Unidentified 1878, Street map of the city of Brisbane, Queensland, 1878, John Oxley Library, State Library of Queensland. (extract). The red dot is my estimate of the location of the photo.

He had a kind heart, my granddad, so perhaps he bought the photo just to help the street photographer out, perhaps he was a fellow Digger trying to make ends meet. I know my grandparents had a camera at home, or among the extended family, because I’ve got quite a lot of photos from the 1920s/30s among their collection.

Why not stroll over to see where other Sepians are off to this week? I wonder if they got caught up in the search like I did when I found myself taking several detours into Trove…I left my mental wanderings as a breadcrumb trail.