Over the last week Darwin has had some fantastic storms complete with thunder, lightning and very heavy rains….a harbinger of the Wet Season to come. This morning it was pelting down outside and blowing several metres under the roofline and through the doors. The plants love it, and will thrive from the bursts of rain over the past week, the first rain we’ve had for months (or has there been the odd sprinkle?).

Mind you, Darwin has looked pretty good this Dry Season…we had such a big Wet last year the vegetation didn’t turn brown until August. The rain here has to be seen to be believed if you’ve never lived in the tropics: huge black clouds billow through the sky and pick up speed with the wind. Meanwhile the birds are feasting on new leaves and blossoms, there seems to be white cockatoos everywhere, and the parrots are getting drunk on the umbrella tree blossoms. Time to bring out my camera….

On Saturday we went for a long drive with the family in a convoy of 4WDs, a nearly-400km round trip just for a family BBQ…go figure. The blokes went fishing for a while with the small people who were very proud to catch (and release) a couple of small barramundi, as well as the excitement of seeing some big crocs languishing in the river. En route home we stopped to inspect a new site and as we made the return sector the heavens opened and the road turned into a red-dirt floodway adding a bit of adventure to a fairly routine drive. The speed of the transformation was pretty impressive I must say.

We Darwinites have been concerned that we were in for a long unrelieved Build Up this year after a blissfully cool and delightful Dry Season (April-June) and a record Wet Season last year (December-ish to April). Why do we hate the Build Up so much? Well the humidity soars, the temperature stays around 35C during the day and usually doesn’t fall much below 28 or 29 even overnight. There’s a good reason this season is called Mango Madness. Firstly the mangoes are in full fruit so the mango-lovers are in heaven but unfortunately this is accompanied by short tempers and “crazy” behaviour as the weather gets to everyone. The tiniest thing can set put tempers on edge…sort of like road rage without the road. It is a better these days than it once would have been – at least now we have the option of air-conditioning in our houses, cars and offices. It does make me wonder how I coped with Port Moresby all those years ago when the only thing that was air-conditioned was the office.

But right now, with the rain having run of out puff, and a rain-cooled breeze blowing it’s absolutely delightful. A reminder of just why we love the Wet!

Now back to the family history trail….

The topic for Week 18 in Amy Coffin’s and Geneablogger’s 52 Weeks of Personal Genealogy and History series is”Weather”: Do you have any memorable weather memories from your childhood? How did your family cope and pass the time with adverse weather? When faced with bad weather in the present day, what do you do when you’re stuck at home?

For me this topic overlapped with those on seasons and also disasters, so I had to think about short term weather patterns.

When I think of bad weather I tend to think of being caught in tents while camping and having to re-peg the tent as the wind howled around. As a family we would then either read or play board games until the weather returned to normal.

If there was bad weather (usually heavy rain) when we were at home my mother would often bake cakes or sew and Dad and I would read. Sometimes as an adult I’d do some sewing on those wet and dreary days. But overall, bad weather = good reading times. For the kids it would be about board games or reading. 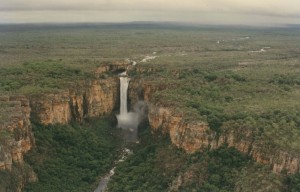 Jim Jim Falls in Kakadu National Park thunders in a big Wet Season but can only be seen from the air.

Heavy rain in Darwin is the norm for about four months of the year, plus a few more months on occasions. It is often accompanied by tremendous thunder and lightning, making it difficult to hear yourself think. On the flip side we have months when we can pretty well guarantee no rain and clear blue skies accompanied by breezes. Delightful!

Brisbane is also rather prone to hail storms, something mercifully missing in Darwin. When the sky turned green it was common for people to dash to their cars and get them under cover, or “run” for home if it was near the end of the working day. Some hail would be the size of golf balls making a severe dent in your car’s paint work. We had some spectacular hailstorms and this picture shows a house in our suburb with a snow-like layer of hail on the ground.

As a child I was staying with my parents in a very basic holiday accommodation on Magnetic Island off Townsville  when a cyclone passed over. It was a biggish one and did some damage so the island was isolated without groceries for a few days as the seas ran high. Ultimately we were all evacuated by the Army on amphibious “ducks”. An adventure but I’ve no recollection of what we did while we waited for the “cavalry”. My mother has not-so-fond memories of the subsequent trip to another island some days later  when the sea was so rough and  the boat pitched from side to side so much that virtually everyone on board was sick, including the captain.

When I was a child, if it was hot I would make a tent under the steps and “chill out” there. It was also common to put a sprinkler on a hose and splash through that to cool down. No backyard swimming pools then. Of course, the many years of water restrictions in Brisbane have curtailed both pools and sprinklers including times for watering plants. Typical of Australia, and rather ironically, these years of drought and fears for diminishing water reserves,  have been closely followed by floods and full dams. Darwin on the other hand has been largely immune from these concerns, partly because of its Wet Season rainfall and partly because of its smaller population.

Another random “weather” memory or two: when we lived in Alotau we had my first earthquake (guria). I had no idea what had happened at first and thought a truck had run into the house so I rushed to get my infant daughter and the kittens and cat. When we moved to Goroka in the Eastern Highlands District I became more accustomed to earthquakes and we have amusing memories of our friends in relation to them: he would rush to save his precious stereo and his wife would save the baby!