The topic for Week 6 is Radio & TV: What was your favorite radio or television show from your childhood? What was the program about and who was in it? http://www.geneabloggers.com/tag/52-weeks-of-personal-genealogy-history/

Well this week’s challenge certainly stretched my brain…probably because I didn’t read the question (you know, exam strategies 101)!

So really just randomly picking one program would have been okay…instead of which I brainstormed TV programs with my husband (even though he didn’t have TV at all in the country where he lived throughout his childhood). This did create some hilarity in the house as we both “sang” TV program theme songs we remembered from the Dark Ages. You know how it goes: “Dum did de dum did de dum did de dum…Bonanza” or “M I C K E Y M O U S E, Mickey Mouse”. Life’s little foolishnesses.

It’s fairly obvious that either Bonanza or the Disney Mouseketeers would have done for my option but no, on we went, thinking of yet more: The Rifleman, The Fugitive, 77 Sunset Strip, I love Lucy (ugh, can’t believe I said that!), The Addams Family, The Monkees, Mr Ed the talking horse, and so it goes. Were there more Westerns in those early days? They seem to be over-represented in this sample. 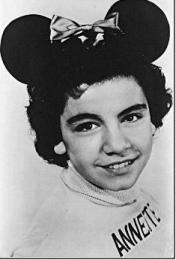 As a children’s show I really enjoyed the Mouseketeers and even had the requisite plastic “ears”…early days of globalisation and branding I think. I have no idea why I liked this show but I guess it must have been fun or I wouldn’t have remembered it so quickly. I liked Annette Funicello best as a member of the cast and I see from their website that she was in the program for three seasons and was said to be a favourite of Walt Disney http://www.originalmmc.com/annette.html. In Bonanza Pernell Roberts was my favourite though like most of my peers I liked Michael Landon too. 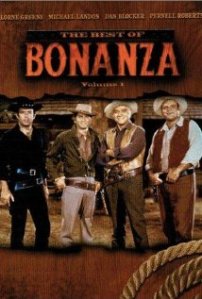 When TV first arrived in Brisbane, it was common for stores to have TV sets in the windows with programs running and for people to go window-shopping to look at what was on TV…or that’s my memory of things.

But I suppose this all kick-started more general thoughts of TV and radio and its role in my life. We didn’t get TV until I’d hit double digits but a neighbouring family with a large number of kids got it early so it was common for others to be there to watch the kids’ shows. However I think for a long time TV didn’t play the role in our family that it did in some families. For one thing, my father worked shift work so the noise in an adjoining room just wouldn’t have been possible when he was trying to get sleep before one of his shifts. I guess it was a habit we just didn’t get into entirely for a range of reasons. Luckily, as when I moved to Papua New Guinea, there was still no TV then either, so my kids grew up without it for some years too. Now I’m much more partial to an interesting TV program 🙂

My memory went into white-noise when I tried to retrieve anything at all about radio programs. I know that we did listen to them sometimes as I have a memory of us sitting in the lounge listening but plainly it just didn’t “grab” me. The radio sets, or wirelesses as they were called, were still large and cumbersome in those days but over the years they morphed into smaller and smaller transistors and gradually cassette players were incorporated. It’s strange to look back over the years and see just how much mass communication has changed, as well as Twitter and Facebook–and no doubt played a major role in globalised popularity etc. It’s equally disconcerting to realise how little I’ve held in memory of the design etc of our old TV and wireless….I have no trouble at all remembering my grandmother’s gramophone. Memory is certainly a weird thing.

I did some googling on radio programs and found ones for Bex, Peters ice cream, Vegemite etc. What was conspicuous was how British the announcers sounded…it was still unacceptable to have an Australian accent in radio. Also conspicuous was just how gender-driven the advertisements really were. If you want a trip into the past you can hear some here: http://www.australianotr.com.au/theadverts.asp#

This topic was certainly an interesting excursion into the past, though this particular “memory lane” was a bit too dark & cloudy for my liking.