This week’s topic in 52 weeks of personal history and genealogy is: Movies. Did (or do you still) see many movies? Describe your favorites. Where did you see these films? Is the theater still there, or is there something else in its place?

I’d been looking forward to the Movies question but as it happens it generated far more memories (and no shortage of questions) than I expected.

Many children “of my era” were routinely given a small amount of money and sent off to the Saturday afternoon “flicks”/movies at the neighbourhood picture theatre with allowance made for an ice cream or lollies as a treat. However, my memory is that I rarely went to the movies and I’m quite certain I didn’t go unaccompanied as my parents were quite particular in that way. There was a movie theatre on the main road at Kelvin Grove and this is where people went to see the current films. There was also a fish & chip shop nearby and I remember we sometimes got take-away from there, wrapped in newspaper. The Saturday afternoon matinee was mainly (I think) serials and news. The news reports were always done in a terribly British accent.

Until I was a teenager every movie show started with a short clip of the Queen trooping the Colours while “God Save the Queen” was played and everyone in the audience was expected to stand. As renegade uni students in the 60s we would defiantly sit through the playing of the national anthem. Now it’s impossible to imagine that anyone would think of playing the national anthem before a movie, and of course even if they did it wouldn’t be the Queen.

The neighbourhood theatre was largely used for the general circulation runs, sort of a pre-multiplex option. For bigger block-buster movies, people went into town to one of the bigger, and generally much flasher, theatres. The roar of the MGM lion was the prelude to many of the movies. The first movie I remember seeing was Fantasia which I saw in Brisbane city with my mother and great-aunt Emily. It was far too imaginative for me and frightened the wits out of me, so my first movie experience wasn’t a great success. That theatre survived in Albert St for many years but is no longer there.

As a young teenager, my first taste of movie freedom was to see an Elvis film (maybe Blue Hawaii?) and a Gidget film. I think the independence was more important than the film! I remember I saw those films at the old Tivoli theatre which was in King George Square. Not only is the movie theatre no longer there, the whole Square was transformed beyond recognition in the early 1970s when we were living in Papua New Guinea. There is a picture of this area on Picture Australia but it is copyrighted (Image BCC-B54-4329). 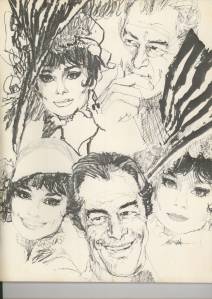 One of the biggest block-busters was of course Sound of Music which I saw at the same theatre as Fantasia. Like most people I thought the movie was great fun, especially the dance sequences and the women’s formal dresses. It seems strange now to realise that every big movie had a printed booklet or type of programme on sale in the foyer. For anyone who could afford them, it was usual to buy one as a souvenir, and to save your ticket. Going to the movies was an “event” rather like a big concert today!

One particular theatre in Brisbane which was very classy was the Regent Theatre, which is still there though it has been modified into a multi-plex model. It was built in 1929 and its décor is quite amazing. This is what Wikipedia has to say about it: The Regent’s entrance foyer is on the narrow Queen Street site, and the auditorium was constructed on the broader site in Elizabeth Street. The original interior decoration was a mixture of Spanish Gothic and Romanesque. The mezzanine foyer contains a white marble staircase, made from Queensland marble, along with vaulted cathedral ceilings. A total of 2,600 patrons were able to be seated in air-conditioned comfort. However my illusions have just been shattered as googling for further information I have just learned that this theatre is now closed, to be destroyed for a 38 storey office block. Really Brisbane has never learned to preserve its heritage…we have absolute disregard for our unique icons, whether it’s the iron-laceworked Bellevue or the historic dancehall (and exam venue) Cloudland!

My recollection is that the Regent had a sound shell for the pianist/orchestra, probably dating back to the silent movie era. I saw My Fair Lady here with my mother and it was quite a formal event. The Regent was one of the theatres where there were always usher(ettes) to show you to your seat. During the interval (and there was always one), the usherettes would come round with trays on which there were ice creams and lollies to purchase. Fantales, Jaffas  and later Maltesers were my favourite treats. It was all very civilised! Watching the YouTube clip on the link above reminded me that we had also taken our daughters there to see Bambi when they were young…half way through the show my husband had to go to the shop across the road to buy more tissues. We were always a hopeless family when it came to animal shows;-) Possibly the only family to ban Disney animal shows on TV!

You can see that the modern cinemas lack the character and drama of these old-style movie theatres.

When I moved to Alotau in Milne Bay, we used to go to the Cameron Club on a Friday night to see whatever movie was scheduled. The venue was partly open and the atmosphere was distinctly informal. As soon as the movie was finished we’d jump in the car and race home so we could boil the jug and have a coffee before the power went off at midnight (we had 18 hour power). To my surprise the Club is still there – described by Lonely Planet as a large cavernous space like a rugby clubhouse. But it was all we had for entertainment so who was complaining?!

In Port Moresby and later in Brisbane we very occasionally went to the drive-in, but with small children and limited baby-sitting options, we rarely went to the movies.

Darwin is famous for its Deckchair cinema, which like Broome’s outdoor theatre is “under the stars”.  I confess we rarely go there as somehow a late afternoon session suits us best and this means the multiplex. One of Darwin’s more aggravating habits is the tendency for movies to come and go with amazing rapidity –blink & you miss it! With all three cinemas showing pretty much the same programs, it’s all too easy to miss out on something you intended to see. It’s common, too, for ones you’ve seen reviewed and marked as “must see” to simply not arrive here.

Far too often these days my movie-watching is confined to in-flight entertainment, so if I’m not flying I don’t keep up with the current releases.

And so to my “faves”, which I might add are not deep-and-meaningful and indeed are mostly pedestrian. These are the ones I watch again and again on DVD.

84 Charing Cross Road: for Helene Hanff’s sassy New York attitude and the stoic Britishness of those at the bookshop. But WHY did she wait so long to go across the Pond?  Didn’t she know travel is as important as new teeth and a brownstone?

Hopscotch: A younger Walter Mathau and Glenda Jackson in a Cold War movie which is something of a spoof. We love it.

Out of Africa: While the others in the Ladies cried over the death of Robert Redford, I was crying about the servant left behind and waiting faithfully, and fruitlessly, for her to send for him. Don’t care about the cinematic bloopers that some kind soul emphasised for me, I just love it.

You’ve Got Mail: For killing my ambition to own a small bookshop.

When Harry met Sally: so many quotable quotes, plus the scenery …but that bizarre female dating behaviour…

My Fair Lady –for the music and those magnificent costumes.

Dr Zhivago and Reds – for the historical era, the drama, scenery and the cold!

Seeing Hawaii with a new boyfriend in the front rows. I don’t think he enjoyed the birth sceneJ

Casino Royale with my future husband and being given a friendship brooch.

Papillon as an anniversary outing in Moresby –ugh –probably the only movie we’ve walked out on.

Born on the 4th of July with Tom Cruise: Sobering for the Vietnam generation. I think he did a good job on this one.

Guess Who’s Coming to Dinner: In Sydney as a teenager.

Outings with other holiday workers from Pellegrinis book store–when the boys would roll Jaffas down the floor –the other customers must have hated us! Typical silly teenager behaviour really.

And lots, lots more. I love movies –they’re one of my favourite forms of entertainment!!!