The Navy was in full-profile in Darwin town this long weekend. We missed the Keys to the City ceremony on Saturday but went with a daughter and small grandsons to see the HMAS Darwin on open public display yesterday. Although it was hot and at times slow, we had a great time seeing over the Australian Navy’s HMAS Darwin. Small boys, parents and grandparents were pretty impressed when the missile launcher showed its super rapid and automated response. I would certainly not want to be on board or anywhere nearby when it was all done in earnest: with the LNG gas plant and tankers in the background you realise just how much damage could be done! You also have to admire the ability of the able seamen to navigate those rather steep stairs at speed. Small boys have gone away very proud of the HMAS Darwin hat and badge and adult people happy with an interesting outing.

Then today the replica of HMB Endeavour also motored into Darwin harbour. Although we’d been on the lookout for it nearby we didn’t see it under sail at all but it was still exciting to see something so evocative of Australia’s white history. Perhaps less so for our indigenous Australians but an eventful moment nonetheless: I’ll be curious to see what the Tiwi people thought when they saw it off Melville Island. Darwin had anticipated Endeavour would be anchored off Fannie Bay last night and there seemed to be a very large number of “Endeavour picnics” awaiting its arrival. However it still could not be seen when dark fell so it was a pleasure to see it arrive this morning.

As it came into Fort Hill then Stokes Hill wharves, Endeavour was pushed and navigated by tugs and its C18th century design contrasted with the sailing boats, speed boats, tugs, trawlers, barges and gas tankers. It is now berthed securely on the inner harbour of Stokes Hill wharf, which took a bit more kerfuffle than Cook would have required given there were no wharves etc in Oz in his time. We’re really looking forward to seeing over it and taking the taller of the grandchildren to see it (they need to be >90cm). 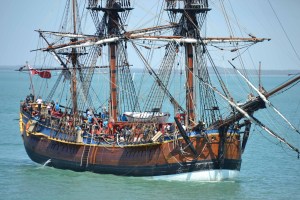 For the non-Australians reading this, HMB Endeavour stands for His Majesty’s Bark (or Barque) Endeavour, a faithful replica of the ship in which Captain James Cook “discovered” Australia in 1770. The replica is currently part-way through a circumnavigation of Australia.

I'm a Queenslander by birth and after nearly 20 years in the Northern Territory I've returned to my home state. I've been researching my Queensland ancestors for nearly 30 years and like most Aussies I'm a typical "mongrel" with English, Irish, Scottish and German ancestry. View all posts by cassmob

Thank you so much for visiting my blog. I am pleased when readers enjoy something I've shared, and love hearing your comments.

You can search for a topic in the SEARCH bar at the top right. Alternatively on the sidebar you will find a CATEGORIES box with a drop-down menu. My other blogs are on the right sidebar under BLOGROLL.
%d bloggers like this: