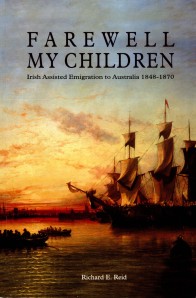 If you have Irish ancestry in Australia, there’s a good chance that at some point you’ve referred to an index of Irish Assisted Immigrants to New South Wales (NSW) 1848-1870, available in most family history libraries around Australia.  I doubt I was alone in thinking, when I first used the index, that this was another very comprehensive genealogy-related index. In fact, it was a by-product of Dr Richard Reid’s doctoral thesis, awarded in 1992 by the Australian National University, the topic of which was Aspects of Irish Assisted Emigration to New South Wales 1848-1870. This thesis can only be read on-site at ANU.

What is exciting news for family historians with an Irish background is that in mid-2011 Richard released Farewell My Children – a book based largely on his thesis. I bought a copy at this year’s Shamrock in the Bush because I’d already read the thesis and I was desperately keen to have my own copy of this benchmark work. Read it, you won’t regret it!

You might be thinking that if this started life as an academic publication it will be too “heavy” and too difficult to read. Not at all! The topics are clearly presented throughout and add greatly to our understanding of our ancestors’ emigration experiences. What I most like about Farewell My Children, and Richard’s historical writing in general, is that he illuminates the topic with specific examples. This personalises the history revealing the nuances at the grassroots level as well as the bigger picture. Another feature of Richard’s work is that he views Ireland as an entity not just Eire or Northern Ireland. While the focus is on Irish migration to Australia, it would also offer a comparative understanding to anyone whose Irish ancestors migrated to North America –after all they are quite likely to have distant family in Australia –it’s surprising how family sometimes took divergent migration paths.

There are multiple strands in the book which address the emigration experience:

If you’ve found it difficult to get your head around the nuts and bolts of how your ancestors obtained their government assisted passage, and what evidence they had to supply, you will find it here.

The practicalities of the Remittance Regulations[i] are also dealt with, including their occasional manipulation by representatives in Ireland and Australia.

2.  The journey to Australia and experience on arrival

The complex and careful management of the immigrants is highlighted. It is pertinent to note the difference between the Australian journey and that of many migrant experiences to North America. It may have been a much longer journey, but the government was particularly attentive to its immigrants. A further benefit of this is the wonderful detail available in the bureaucratic records and especially the Board’s Immigrants Lists where they survive.

Do you ever wonder how typical your Irish family really was? Richard talks about the characteristics of the immigrants, their literacy and skills, age and gender balance as well as their marital status. This is a fascinating insight into the differences between Irish and other immigrants.

The book and thesis train the research lens on the emigrants from Clonoulty. If you have ancestors from there, you will find this chapter especially useful.

The book talks in detail about the Irish Famine Orphan migration from Ireland’s workhouses, which is relevant to our family as my husband’s ancestor was a Famine Orphan. It’s pertinent to note that not all were actually orphans.

Wives and children of convicts also come under this heading as they were often impoverished by the breadwinner’s transportation. (Dr Perry McIntyre’s recent book Free passage : the reunion of Irish convicts and their families in Australia, 1788-1852 is also a must-read for anyone whose family fits this category).

When I read the thesis I had no reason to be particularly concerned about Donegal so I only skimmed this section. In the meantime I’ve learned my son-in-law’s paternal ancestry is tied into this migration from Donegal, so I found this chapter especially interesting.[ii

Remittances played a key role in the chains of Irish migration in families and friendship groups and are what led me to Richard’s thesis in 2004. This was the link between this broader Irish research and my own East Clare research focused on Broadford, Parish of Kilseily where the parish priest and some key representatives in Australia appear to have manipulated the system to ensure a positive migration outcome for East Clare people.

It’s no doubt obvious that I regard this book as the door to Dr Reid’s benchmark research on Irish migration to Australia. I for one am very grateful this research made the transition from academic thesis to an accessible book I can keep on my shelves. There are any number of reasons why Richard’s book is particularly relevant to my own research (especially East Clare migration) but I’m confident that anyone with Irish ancestry, or others, would be able to add to their understanding of the migration experience by reading it. Dr Reid’s history-writing style has made him one of my own “history heroes”. In my library his book sits beside Oceans of Consolation by David Fitzpatrick and Robin Haines’ Life and Death in the Age of Sail.

With such significant and informative content Farewell my Children should become a prime resource for Irish family historians and anyone with an interest in Australian migration. If you’re looking for a Christmas gift for yourself, print out the book details and leave it lying around as a “hint” for the family gift-givers. Don’t forget, too, that if you live near a large reference library you can have the book sent on inter-library loan from the National Library of Australia.

Disclosure: I have not been asked to comment on this book, nor did I receive any remuneration for promoting it. It stands entirely on its own merits.

[i] The Index to the NSW Immigration Deposit Journals 1853-1900 produced by Pastkeys is a valuable entry-point to the remittances at a name level.

8 thoughts on “Thoughts on “Farewell My Children” by Dr Richard Reid: Irish migration to Australia 1848-1870”