Our family didn’t visit the cemetery at Christmas nor was any mention made of family members who died around this time. I guess when family members die at this time, the ones remaining just want to reflect on it themselves and don’t want to air their feelings.

This is in direct contrast to my Kunkel family’s Bavarian heritage where the local cemetery and the deceased family members are honoured throughout the year with seasonal decorations and candles on the graves.

A couple of branches of my ancestry also arrived in Australia within days of Christmas so really I should celebrate them as well on Christmas Day.

My grandmother died on 19 December and as we were in Brisbane from Papua New Guinea at the time it was very sad even though she was in her eighties. Dad was very close to his mother so he didn’t want to talk about it at all, and there was a general injunction not to mention the “D” word even in relation to inanimate things like trees. However that Christmas my daughter was also an infant on the crawl,and as the first grandchild whom they saw infrequently due to being in PNG, she provided a great distraction in what was otherwise a sad time for Dad.

My paternal grandfather had good reason not to talk about deceased family on this day. His father, George Michael Kunkel aged only 43, died on Christmas Day 1901.  Just six weeks earlier George and his children had lost their wife and mother, Julia. As the eldest son and child, my grandfather would have been at the forefront of all the impact of their being orphaned. On that Christmas Day the message was sent to my great-great grandparents, George and Mary Kunkel, that their son had died of a heart attack at Grantham, about 14 kilometres from the Fifteen Mile at Murphys Creek where his parents lived. What a horrible time they would have had on that Christmas Day. It was always going to be a sad day with the loss of Julia being so recent, but to lose George as well was truly a tragedy – about which I knew nothing until I started doing family history. As far as I know my father knew nothing about this event either – my grandfather kept his own counsel. 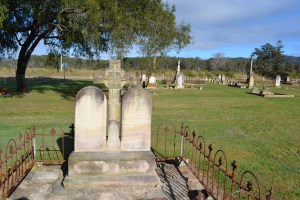 George Michael Kunkel was buried in the Murphys Creek cemetery on 26 December 1901 in the grave where his sister had already been interred and where his parents would later lie at rest. The restoration of this grave has been completed in 2011, as a memorial to their people who founded the family, and their descendants.

Thomas MacEntee at Geneabloggers is encouraging us to celebrate the 2011 Christmas season with a series of posts called the Advent Calendar of Memories. This is today’s entry.