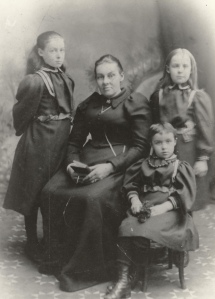 The photo which inspired this post is the same as that for the Carnival of Genealogy  post on Catherine McCorkindale for Women’s History Month 2012. It shows my great-grandmother, Annie Sim McCorkindale seated with her daughters Catherine, Jean and Edith around her. Her eldest daughter Isabel is not in this photograph. I’ve estimated the date of this photo at c1900 which makes me suspect it may have been taken to give to sons Duncan and Peter before they left for Australia.  She looks composed in this photograph and I’m guessing she’s holding her bible.

Annie Sim, second wife of Duncan McCorkindale, gives every evidence of being a strong woman capable of dealing with life’s challenges. She grew up on Backrow farm at Bothkennar, Stirling, daughter of James Sim and his wife Ann Wood. The farm had been in the family’s management for generations, though it’s likely they only leased it, but it does mean that she came from a family with rather more money than many of my ancestors. Backrow farm faces the Bothkennar church and school and Annie’s parents are buried in the kirkyard.

As a young woman, Annie defended her father when some hooligans entered the farm property and took her father into the corn fields to rough him up, apparently all because the family dog barked at them.[i] I loved discovering my female ancestor was a feisty woman!

Annie had an illegitimate daughter, Annie Lindsay Sim. I’m waiting on the release of the online Kirk Sessions to see what they tell me about the circumstances surrounding her daughter’s illegitimacy. Annie Lindsay Sim was essentially brought up by her grandparents after Annie’s marriage to Duncan.  I wonder how Annie felt having to care for the two children of her husband’s first wife while forgoing her own first-born child. She did not inherit under her father’s will because he had brought up his granddaughter. However history proves that the family links remained close as we’ll see later.

Family legend tells that shortly before Annie’s husband Duncan died in 1906, her wedding ring came off and rolled across the floor. She went to give him a cup of tea, only to find him dead. Of course these may be only family stories, impossible to verify. Four years after Duncan’s death, Annie and most of her children emigrated to Australia. Her sons, Duncan and Peter, had come to Australia about 10 years earlier, supposedly to separate them from the 2nd cousins they wanted to marry. Annie’s first-born child, Annie Lindsay Sim, who by then had been widowed and remarried, arrived in Australia with her husband Daniel McVey and his family, around the same time. It’s interesting that the whole family, minus one son (Thomas Sim McCorkindale), had decided to make the big move.  Annie Lindsay Sim’s son from her first marriage, Robert Anderson, also made emigrated.

I admire Annie Sim McCorkindale’s fortitude at making this international migration when she was 59 years old. She arrived in Queensland as a sponsored migrant, nominated by Alex McCulloch of Paddington, and documented as “married” rather than widowed[ii].  I’m still trying to work out what the connection was between Alex McCulloch and the McCorkindales.

In her old age Annie lived with her daughter and son-in-law in Guildford St, Kelvin Grove. A granddaughter remembered that Annie had blue and white jugs in the kitchen, loved “wee brown eggs” and the family grew a coffee plant and ground coffee (people after my own heart!). It’s safe to assume that Annie would have met my father as an infant and toddler, since she lived quite close to my grandparents’ home. Annie Sim McCorkindale died in 1926, aged 75, and is buried at Toowong Cemetery with an infant grandson.

Annie’s relocation was worthwhile for her adopted country as well as the family. Her descendants made their impact on Australian society in various ways, small and large. Her son Duncan was a foreman at the Kingston joinery works and so instrumental in the construction of Canberra. He also contributed to the development of a Caledonian tradition in Canberra, acting as a judge of the pipers and dancing at the first Highland Games held by the Burns Club in 1925. His early death in 1928 was a loss to the Caledonian community as well as his family. Duncan’s daughter Ida was also worked in Canberra but subsequently vanishes. Annie’s other sons Peter and Malcolm were great pipers and Highland dancers, and although my father said Malcolm was the better piper, his nerves affected his performances. Newspaper reports reveal Peter winning one competition after the other at various Highland or Caledonian games as well as being Pipe Major with Brisbane’s Caledonian Band. (I wonder if there’s anyone still alive who was taught or mentored by one of the McCorkindale pipers). Annie’s step-grandson, Sir Daniel McVey, had a pivotal role in post-war aviation and was also Director of Posts and Telegraphs.