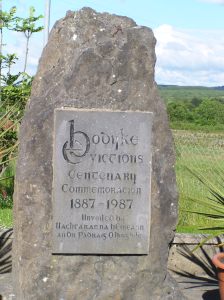 In the summer of 1887, 125 years ago, a grassroots agrarian revolution was taking place in the otherwise quiet parish of Bodyke, County Clare.  Colonel O’Callaghan , one of the local landowners, had significant rental arrears on his tenancies and planned to take action against those in default, evicting them with force.  There is a tendency for family historians to assume that landowners simply evicted their tenants without fear of the law, yet this was not the case. The eviction would be preceded by a legal process before sending in a force of constabulary or emergency men to enforce the eviction.

Nevertheless the rents had been steadily increasing over the preceding years, in part because of O’Callaghan’s own personal expenses.  Such was the increase that the judicially imposed rate might be nearly double the Griffith Valuation of the early 1850s, yet the rack rent would be a further 50% or more higher.  Despite these rents, at least some families were not farming quality land. Rather the land they rented was often poor quality mountain land with limited productivity.  Often the tenants were truly poor and utterly unable to fund the exorbitant rack rents. To put these expenses in context, a housemaid on the O’Callaghan/Westropp estate in the 1830s would earn only £3 a year, nearly the same amount (£3/4/7 ½) that tenant John Garvey had to find on each gale day in March and September of the 1830s. This clearly shows how each family member would need to earn and contribute to the rental payments.[i]

I love this photo of Honorah O’Brien Garvey which was given to me by her great-granddaughter. Her face reflects her hard life yet also shows her strength of character, offset with the bunch of violets.

John Garvey, rented poor mountain land in the townland of Ballydonaghan, valued at £7/10/- by Griffith with a judicial rent of £8 and rack rent of £12. His land was among the poorest on the estate which perhaps reflects the close correlation between the judicial rate and Griffith’s valuation. Over the years his rentals were often paid late and the payment was a mix of cash and labour, including gamekeeping or his wife’s needlework.  It’s no surprise then to find that he was listed among the 57 to face eviction in June 1887.

The local Catholic parish priest, Fr Peter Murphy and his curate Fr J Hannon, were both strong supporters of the Land League and ownership of the land by the people. Throughout this struggle, they were naturally on the side of the tenants, virtually all of whom would have been their parishioners. Fr Murphy attempted to negotiate a compromise agreement with Colonel O’Callaghan which might satisfy the landowner yet be possible for the tenants to pay. The 57 tenants joined the Plan of Campaign to challenge the evictions, supported by their clergy. However the negotiations faltered and these 57 tenant farmers on the O’Callaghan estate received eviction notices. 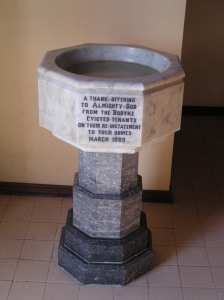 The evictions went ahead amidst much public outcry and significant press attention. The tenants put up a feisty defence, barricading houses and passing belongings to their neighbours. Of the 57 families, 30 were evicted[ii] before the process ground to a halt. The name of John Garvey is number 32 on the list so it seems the family narrowly avoided being turned out of their home and the roof knocked in.

Are you wondering why tenant John Garvey is the person I’ve chosen to highlight? He became my 3xgreat uncle when he married Honorah O’Brien from the nearby parish of Kilseily (Broadford), itself a venue for huge Land Rights meetings in the 19th century.  Honorah was sister to my Mary O’Brien and they had grown up on the hilly townland of Ballykelly not far from Broadford village.

Although the Garveys escaped eviction, the fight presumably took its toll and John died in March 1888. On some of the eviction lists his name has been replaced by that of his widow, Honorah Garvey. Life didn’t become much easier for Honorah as when their home was “visited” by the landlord’s agent on 22 April 1892, she is recorded as being in rent arrears of £60, a huge amount of money. The same page is also noted showing rent of £8 yearly, arrears £15 and £75 wiped off. The reason for the difference appears to be the reduction in rent from the rack rate of £12 to the judicial rate of £8 but this does not explain it all. The Garvey land of 260 acres and 12 perches is described as “mountain with patches of tillage”. A faint annotation on the bottom of the page says (smashed) (going away) yet we know she never left Bodyke and other records, including the 1901 and 1911 censuses, indicate she remained on the property.[iii]

Nothing on this window gives a clue that John and Honora Garvey lived and died in Ireland.

The annotations also note her husband is dead and she has sons Patrick and Cornelius.[iv] The latter is interesting because at different times both sons went to America to earn a living, as did some of their siblings. Five of Honora’s children emigrated permanently to Australia showing the significance of chain migration in Irish research.

John and Hanorah Garvey are my family’s faces from the Battle of Bodyke, illustrating the precariousness of tenancy until land ownership became possible.  They are honoured by their Australian family with a stained glass window in the Catholic parish church of St Peter’s Surry Hills, Sydney.

East Clare Heritage Commemoration of the 125th anniversary of the evictions 20th July 2012.

Further references are included in the footnotes.

[iii] My notes include the comment on these records “fantastic information on some tenants including sons in America”.

13 thoughts on “The Bodyke Evictions and the Garvey family”