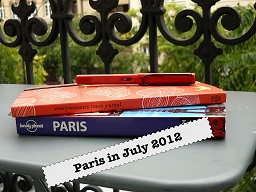 It’s ironic that July is a Francophile’s delight with the Paris in July 2012 series hosted by Karen from BookBath and Tamara from Thyme for Tea. Entirely coincidentally I’ve been reading books with French themes this month. It all started with in-flight reading on the 3 ½ hour flight from Brisbane to Darwin in early July.  I’d downloaded the new book by Joanne Harris, Peaches for Monsieur Le Curé as it caught my eye in a bookshop. I hadn’t read Chocolat (or seen the movie) which perhaps would have added to the back story in some of the book but nonetheless I thoroughly enjoyed reading about the challenges of life as a small French village comes to term with its immigrant Muslim neighbours.

Taken with the writing style I looked in the local library for Chocolat but it was already out on loan so I settled for two other Joanne Harris books: Five Quarters of the Orange and Coastliners.  After devouring these I borrowed Holy Fools which hasn’t engaged me as yet.

The three books I’ve read had some commonalities:

While some of the story lines might stretch credibility the books were very readable and I enjoyed them a lot, though I was aghast at how Framboise, an elderly widow when we first meet her in Five Quarters, determinedly abused her mother’s illness and headaches for her own interests as a young girl in the same village.

Perhaps not the most profound books I’ve read, but enjoyable reading just the same, and nicely fitting this month’s emphasis on any/all things French.

5 thoughts on “Paris in July 2012 and French-themed novels”