Once again I’m following in the footsteps of Julie from Angler’s Rest and reporting in on my recent Library Loot.

When I pick books up from the library I’m less selective than when I’m splashing my own cash: I figure that I can try something new and even if I’m not rapt in it, then it doesn’t really matter. On the other hand sometimes I get lucky and discover something that really appeals to me.

Two books from the Palmerston Library which I’ve read recently  might be of some interest to my readers and fellow family history junkies.

Titanic Lives may seem like it will be yet another beat-up about the well-known sinking of the Titanic, but it actually offers a much deeper perspective.  The author, Richard Davenport-Hines, is an historian and biographer and his skills shine through as he writes about how the passengers on Titanic, and their lives, were a microcosm of, and reflection of, life in the era. He also documents the sources behind his story. What I most liked about the book is that it personalises the saved and the lost: they become real people not just “steerage” or “rich”. I wasn’t especially interested in the wealthy Astors, Wideners or Guggenheims but there were riches indeed in the stories of those in 2nd class or steerage/3rd class passengers.

If your ancestors emigrated in this time frame (early 20th century) there is much in this book to illuminate your ancestor’s travel and migration experience as well as the challenges of gaining entry to the USA through Ellis Island. The author also devotes a chapter to the crew of the Titanic, providing great insights into the working lives, and safety hazards, of the merchant seaman. As I have several of these in my family this chapter was very interesting on the responsibilities of stewards and firemen. Admittedly my ancestors were working on rather less glamorous ships than the Titanic but nonetheless there’s useful information there.  I found this book very interesting and learnt a good deal from it. This is not just another reiteration of the story of a major tragedy.

Home with Alice: A Journey in Gaelic Ireland 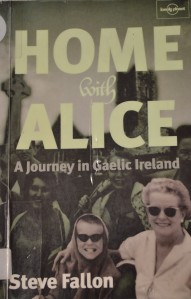 This book might be of interest to my readers who are keen Irish researchers with its exploration of Gaelic-speaking Ireland and the role, and threats to long-term survival, of the language.

When I picked the book up at the library I thought it might be another version of Brigid by Australian author, Jill Blee, which I had enjoyed for its focus on Co Clare. In fact this story had little in common with Brigid, despite the nominal role of the author’s aunt Alice in his journeying to Ireland’s Gaeltacht districts. I personally found Alice’s interventions contrived and unnecessary other than to explain the author’s initial decision to learn Irish.

Author Steve Fallon is a journalist and, inter alia, a travel writer for Lonely Planet, and at times the book takes on the tenor of a guide book. However I enjoyed learning more about the challenges of Irish as a language, especially as at one point I’d thought of learning it myself.  If anything the book convinced me this was a delusional aspiration due to the language’s complexity. I learnt that there were differences between the various dialects within the Gaeltacht regions, the new acceptance of Irish as a fashionable language with the rise of the Celtic Tiger, and the invasiveness of English into the Gaelic expressions.

It’s always a pleasure, too, reading a book which describes places you may have visited so that you can visualise where he’s talking about, whether Connemara, Kerry or Donegal. The impact of Gaelic television and radio also reminded me of the significance of Australia’s own ethnic broadcaster, SBS.

I do find the Irish-American tendency to identify as “Irish” a bit strange. While I too have an Irish passport like the author, and have many branches of Irish ancestry as well as a love of Ireland, my mongrel Australian ancestry means I feel it would be inaccurate and presumptuous to call myself Irish. Apart from the significance of the Catholic church to Irish emigrants in both countries, the experience of being a descendant of Irish emigrants in Australia seems to me to be quite different from that in “America”.