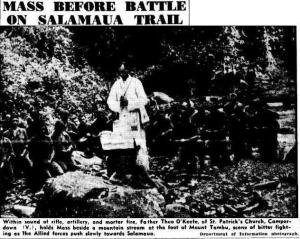 Lately my mind has been turning to Papua New Guinea again as we plan an upcoming trip back to Alotau after a mere 41 years. As it does in these circumstances, one thought leads to another and before long I’m off on a tangent.

No surprise then that I picked up my copy of The Last Blue Sea the other night to re-read it. Originally published in 1959 the book won the inaugural Dame Mary Gilmore Award. My guess is that it would be the best part of forty years since I last read it, having first encountered the book in high school.

In theory the novel is entirely fictitious except for the presence of renowned war photographer Damien Parer.  Whatever the truth of the specifics, there’s little doubt that the story builds on personal experience and a deep knowledge of World War II in New Guinea circa 1943 (post-Kokoda). It has an unusual writing style which ultimately seemed very effective but I confess I occasionally got confused as to which soldier was which, despite the list of key characters in the beginning.

This is one book in which the place (the jungle near Salamaua in what was then New Guinea) is very much a major character, shaping the individual soldier’s experience and responses. Having the tiniest understanding of just how impenetrable the jungles of PNG can be, I am in awe of their survival and persistence.

My take-away thoughts from this book were:

I found this novel to be very powerful and will be rereading it again soon, to absorb the finer points I missed in my rush to follow the story.

The nom-de-plume of the author was David Forrest and in fact I never knew it wasn’t the author’s real name. Turning to Google I found that David Forrest was the aka for Dr David Denholm. As soon as I read that, bells rang in my head. Sure enough he is the author of a BA (Hons) dissertation at The University of Queensland, on the Coming of the Germans to the Darling Downs 1852-1861, which I’ve referenced in my Dorfprozelten research. I was quite tickled to discover this link.

As I read the book the words of an Australian poet echoed in my mind. David Campbell’s poem Men in Green carries some of the same resonances. This is a short extract but please do have a look at the full poem from this link:

Their eyes were bright, their looks were dull,

Their skin had turned to clay

Nature had met them in the night

And stalked them in the day.

And I think still of men in green

To keep a jungle back.