It’s quite a while since I’ve participated in the Saturday Night Genealogy Fun series by Randy Seaver from Genea-Musings but it looked like fun and I had a bit of time so here goes (and yes, it’s no longer Saturday).

The challenge for this week was: 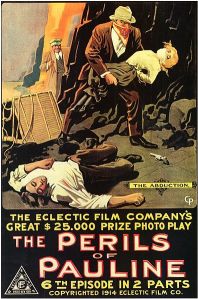 My name, Pauleen/Pauline is very much a generational name. The only mitigating feature is that my family decided to spell mine differently. I like to say that it’s the Irish way, like Maureen, Kathleen or Colleen. The truth was rather more mundane but it works for me <grin>.  There were no entries on Baby Name Wizard under this spelling so I reverted to the normal version, Pauline.

I was a little surprised to discover that the height of my name’s popularity was in the 1910s when it was ranked #134, possibly because of the movie series, the Perils of Pauline.

The name has virtually flat-lined in the US today but retains #38 in Belgium, #57 in Germany and #328 in Norway, which is kind of weird really. Perhaps it’s a case of my German heritage coming through?

Pauline is the diminutive of Paul so really means “little little” –which is ironic since I’m quite tall, and no longer quite thin. Apart from which I have a complete antipathy to the misogynistic St Paul. Definitely a double whammy misnomer! I don’t have a second name so I’m stuck with what I’ve got. Eventually I realised I’d have liked to have a variation of Catherine –a name which runs in all my family lines –and the very name my mother want to avoid…ironic isn’t it.

Also check out your spouse, your children and your grandchildren

As suggested by Randy, I looked at my husband’s, children’s and grandchildren’s names as well which was interesting. I’m not going to list their names in this post but here are some of my findings:

Mr Cassmob: An old-fashioned name with cyclical popularity: #41 in his birth decade but now sitting at #192.

Daughter #1: A name which peaked in the 1880s and flat-lined in the decade she was born. The alternate name we’d thought of doesn’t rank at all, yet there are three daughters born to our friends who have this name. She’s not on a name-winner because her second name is almost as unpopular, and no, neither of them is “weird”.

Daughter #2: Peaking in the 1980s and #33 in the decade of her birth, we obviously hit upon a more popular name this time round.

Daughter #3:  Her name was in the top 10 in Australia when she was born (not why she was given the name), and the graph reflects this with a US position at #13.

The grandchildren are also variable with the eldest grandson not even on the scale, while our granddaughter’s name is top of the pops at #1. Our youngest grandson’s name sat at #98 the year he was born, so they’re spread across the spectrum.

“A rose by any other name would smell as sweet“. Did Mr Shakespeare have it right?