Did anyone tell you I’ve returned home?

Mum & Dad were apparently terribly agitated and very sad that they’d never ever see me again: they cried and cried and put posters in hundreds of letter boxes but no one had seen me. Lucky for me the cat gods were looking after me and I’m perfectly safe, if a little wiser.

I came home on the evening before my 7th birthday, Anzac Day. I’d been away for 7 weeks, one week for every year of my life (well in human terms anyway). They say that marriages have seven year itches, and people have mid-life crises, well I was turning 49 in cat years and I think that called for a crisis of its own. I just didn’t expect it wouldn’t be much fun. I don’t like to frighten my family so I haven’t told Mum & Dad all the things that happened, and they’re really not very good at understanding cat language, so I just look deeply into their eyes instead and purr and do paddy-paws.

What happened was that Mum was in Brisbane, Dad was at work and I just felt like a little adventure. I was tired of being home by myself – I’m used to company while Mum works on the computer. My friend Slinky Malinky, a black cat who I’ve been playing with lots, dropped by and we were running and playing in the yards nearby.

Then I got a terrible fright – a scary person I didn’t like tried to catch me and I hid. Later on some big dogs chased me –there’s far too many of those creatures around here!  I ran and ran so fast to get away from them and I had to dodge the cars as I raced across a big street. By the time I stopped I just didn’t know where I was, even though I know some of the streets from when we go to the vets or the cat resort.

For a couple of weeks I just wandered around trying to find my way home, getting more and more lost and hungry even though I managed to catch a couple of mice in the parks. One day when I was nearly starving a kind lady offered me some milk and food so I just decided to trust her for a couple of weeks. She hadn’t seen any of the posters my family had put up in the shops so she didn’t know to ring them and instead she called the pound to come and get me.

I’m lucky I’m so handsome because they tried to find my home by ringing all sorts of people. Even though they had my picture on their wall they didn’t realise it was me, because my face looked a bit less ginger in that photo. None of the people they called were my family and they went home looking very sad. After I’d been there nearly 2 weeks,  they called Mum and told her they just might have me, even though they couldn’t find my microchip…I think it must have fallen out. Was I big cat? Had I been desexed? Yes, what do I know about girls?! It’s not as if I’d run away just to chase some girl. Mind you, I liked to have met the girl cat who’s missing from near here and who looks a lot like me…she looks nice. 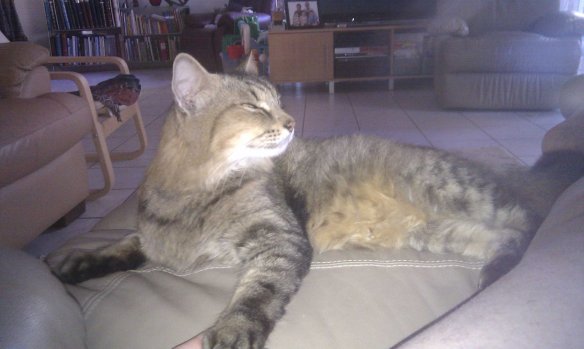 Mum arrived at the pound and she told me her legs were shaking all the way there and she kept praying it would be me. When they took her into the cat room we just looked at each other but after she opened the door and leant in, I gave her my favourite head-butt of affection. We both knew I was going home! The ladies from the pound and PAWS were so excited they had tears in their eyes.

Ever since we got home I’ve been so happy to be here. I can’t get enough pats and cuddles and keep sitting as close as possible to my family and purring and purring. I even like the grandchildren now.

I don’t want to be aloof any more, I’ve had my fill of adventure. When either of my family sits down I jump straight up and join them for a cuddle. I even sleep on the end of the bed now and if I feel lonely I can go up and ask for more pats. Mum says my eyes look a bit different now – of course they do! I saw some scary stuff out there in the wilds of the suburb.

I’m done with my mid-life crisis, I just want to be safe at home. Every now and then I look out at the courtyard but it’s a scary world out there, and inside everyone loves me. You’d think I was a celebrity the way my family has turned into the paparazzi and take my photo at every turn. And everywhere my parents go people are just so thrilled that I made it home safely – and so am I.

Mum wants to get in on the act now, but I don’t mind because we’re such good mates.

Mr Cassmob & I are so grateful for the kindness of all our friends and the random strangers we bailed up to ask about Springer. The TELAF people were fabulous in keeping Springer’s photo in the missing list for people to see and the RSPCA, PAWS and the pound were all responsive to our requests for follow-up. We’re eternally grateful to have our boy back safe and sound and especially thank the unknown lady who looked after him in Holtze St as well as the PAWS ladies at the pound who called us to come and look. People have been so kind.

36 thoughts on “Guest post by Sir Springer the Cat”