The topic for Day 11 of the Advent Calendar of Memories 2013 is Christmas at Church: There are a variety of activities at Church during Christmastime, and they can vary based on your denomination or church. From the lighting of the Advent Wreath to Midnight Mass or Christmas Eve church services, for many, church is a central focus of the Christmas holiday.

My mother and I were always church goers and my father would very occasionally join us for Midnight Mass even though he wasn’t a Catholic. Christmas, like Easter, had many phases to the preparation for Christmas including the priest wearing purple vestments throughout Advent then wearing white on Christmas Day.

In more recent times the church has had Advent wreaths with various coloured candles for each week of Advent and while I don’t really recall this from my childhood, I do distinctly remember the Easter candle being re-lit at Christmas. The crib would be set up in the church and the baby Jesus added, I think, on Christmas Eve. We did the same thing at home: the crib was set up on a large corner display table with an angel hovering over it and suspended by the glass top of the table. Again, the baby would not be added until Christmas Day.

It was traditional to go to Midnight Mass on Christmas Eve when I was a child and this was a tradition we continued with our own children for many decades. It was part of what made Christmas special, including the sleepiness, darkness, and then the candles. The band at the church we attended would play subdued carols throughout Midnight Mass, then when then as everyone left, full of the spirit of Christmas, they’d launch into rocking versions of carols with full acoustics. It was fun, and very different from the churches overseas.

Of course in Australia, we had the advantage that we didn’t have to contend with snow, jackets or the freezing cold. Even at midnight it was often still quite hot. 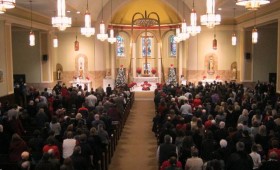 When we came home we’d have shortbread and a hot drink. Midnight Mass also had a good off-spin which is that the kids were then tired enough to sleep in a little on Christmas morning and not wake us up at 4am! One of our traditions was that they had to roll over and go back to sleep when they first woke up, then they could look at one of the parcels on the end of their beds. Between this tradition and not getting to sleep until 1am, we were rarely awakened at an unholy hour on Christmas morning.

I’m not going to re-submit a response for the Christmas at School(day 13) topic, but if you would like to read my 2011 post, you’ll find it here.

This post is part of the Advent Calendar of Christmas Memories (ACCM) which allows you to share your family’s holiday history twenty-four different ways during December. Learn more at http://adventcalendar.geneabloggers.com. You can see the posts others have submitted on the Advent Calendar Pinterest site. My post today is a minor re-working of my 2011 one.

3 thoughts on “Advent Calendar of Memories: Day 11 – Christmas at Church”