It seems that this past few days have been a voyage of discovery. First I think I’ve cracked the mystery of my Mary O’Brien’s arrival even though there’s some archival searching to be done, then a repeat search of Trove for George Kunkel turned up another gem! And yes, this should have been a Trove Tuesday post, but then again it’s no longer Tuesday.

The first snippet I found was an advertisement in the North Australian newspaper of Saturday, 14 July 1866:

THIS DAY-AT 2 O’CLOCK. In the Court of Requests, District of Ipswich. WILSON v. KUNKEL. TAKE Notice that HUGHES & CAMERON have received instructions from the Bailiff of the Court of Requests to sell by Public Auction, at the Residence of the Defendant, East-street, THIS DAY (SATURDAY), the 14th Instant, at 2 o’clock sharp, The following GOODS and CHATTELS, the property of the Defendant in the above cause, seized under execution, unless the claim be previously satisfied : 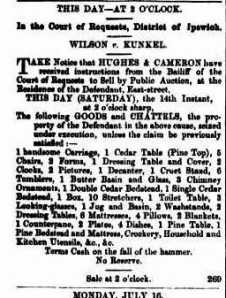 Terms Cash on the fall of the hammer. No Reserve

It was around 1866 that the Kunkel family appeared to have headed west with the new railway line to Toowoomba. It’s believed George worked on it, but perhaps another possibility is that he was working as a butcher supplying the men, just as he did on the Tooloom goldfields.

Perhaps this explains why the family needed to move. If the proposed auction of their belongings proceeded on that Saturday, surely the family would have been left with little to support daily life. What I find interesting is that the sale focuses on his household belongings. Did he no longer have any business assets? While it was generally required that a man be permitted to keep the equipment needed to do his job, surely there would have been something else to sell than the beds from under their bodies.

There’s another “spin” to this, too, because when George and Mary’s daughter Elizabeth (always known as Louisa) was born in March 1866, George states his occupation as “boarding house keeper”. It seems he was following on the skills learned at his mother’s knee and generations of Happs who ran Das Goldenes Fass inn back home in Dorfprozelten.

Perhaps the reason there are so many assets listed here is because they were part of the boarding house rather than the family’s own. Nevertheless it’s clear they were reasonably well fitted out for a working class family with five children.

All those questions aside I wondered what had brought George to this point. I’d never found a bankruptcy case or a liquidation order against him.

Further research of Trove revealed at least part of the cause. George was being pursued for dishonouring a £6 promissory note as well as the cost of goods purchased (but presumably not paid for!) of £8 2s 6d. In both cases Wilson was claiming 5 shillings costs, so another £1 to add to the original £14/2/6.

It seems apparent that George had got himself into financial difficulties perhaps by being over-extended in his business arrangements. Their son Thomas was born circa 1868, and his birth and baptism are the only ones I cannot find from the 10 children. My conclusion is that somewhere soon after this financial debacle in mid-1866, the Kunkel family started westwards for the Darling Downs. They later took up a selection at Murphys Creek in 1874. They would never live in Ipswich again, though their granddaughter expressed the view that it was a shame they’d left there, presumably not knowing the reasons why, or echoing something she’d been told as a child.

Trove Tuesday is a theme created by Amy from Branches, Leaves and Pollen blog.

6 thoughts on “Another few bricks tumble on Trove”