Back in 1984, the Cass Mob ventured forth on their first skiing expedition as part of a driving trip around New Zealand. We’d first been there in 1975 but at a different time of the year, and with no plans to ski. This time we had promised the girls there’d be snow…and plenty of it.

Sure enough there was plenty as we drove over Arthur’s Pass without chains (don’t even go into the reason behind that, thank you Avis!)..scary enough that another driver had a heart attack. But by the time we got to our cabin near the Mt Hutt ski-fields, snow was a little thin on the ground.

Bizarrely at the same time there was actually snow falling at Stanthorpe, about 150kms from where we lived, and Dad always vowed and declared that when he was on night shift in the Roma St Railway yards that week, there’d been snowflakes which melted before hitting the ground. And there we were, almost snow-less in the ski-fields….well I exaggerate a little.

I think these photos were taken on our very first skiing expedition and as you can see we were the picture of skill, grace and glamour! I was clever enough not to be photographed actually trying to do anything!! That night there was a massive dump of snow and we were holed up in our cabin, log fire, marshmellows, games and books.

A couple of days later we were able to venture up what was a rather scary road for we sub-tropical folk and have another go at skiing. I think it’s safe to say that Mr Cassmob and I promptly decided any winter sports skills we had would be confined to skating, not skiing. Before we left that day the older two were whizzing down steep slopes quite confidently.

It was traditional at their school to do a ski trip in their final year of school. Each and every one of our little “angels” made it their mission to ski the black runs before they came home!! But my abiding memory is the bedraggled group of young ladies who set forth on one of the trips the night after their Year 12 final….wild and woolly.

I was going to say that was the start and finish of our skiing adventures, but I just remembered I took DD3 and her cousin to the Snowy Mountains one September holidays when I had a week off work with the kids and it suddenly started dumping. So a 3000km drive to go for a few days’ skiing…I must really be mad!

We camped among the snow gums below the snow line at Sawpit Creek and had possums visiting us every night. Possums have something in common with humans – they like to eat what they shouldn’t, especially marshmellows. 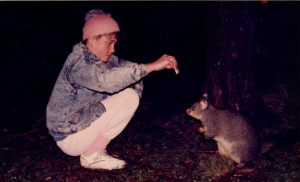 The kids had fun… attempting to ski and building a snowman and generally playing in the snow.

Camping below the snow line was a bit of a challenge though…one way to use every article of warm clothing in the car. And they made sure I paid for it with this glamour shot…after all when it’s below zero who cares how you look!

Why not see what  other Sepians have had to say about snow and skiing this week. Was it something they’re sick of or longing for?

13 thoughts on “Sepia Saturday : Skiing the black runs…or not!”