This week’s Sepia Saturday is about the horse, the cart and the drivers. While my Denis Gavin from Kildare and Dublin worked as a bullocky out west when he first arrived in Queensland I have no photos of him, or his bullock dray. Many of my ancestors also rode the iron rails but today’s photo is of none of these.

This photo is one I included in my Kunkel family history. It was given to me by Dad’s cousin and shows a bunch of dodgy looking blokes hanging around the 20th century cart and horse…a truck. I know my grandfather’s brothers worked as carriers but the cousin couldn’t identify which was her father, Matthew David John (John) Kunkel. If I was guessing I’d say it was the bloke on the front right, and strangely she wasn’t sure…or perhaps he was the photographer. Actually I’d have expected John’s brother Ken to have been with him as they were very close. 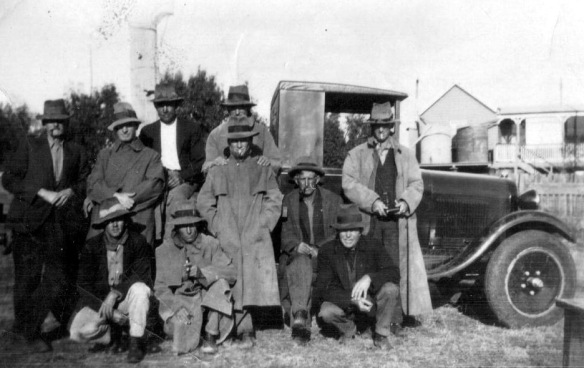 But isn’t it a great photo?! All dressed in their Driza-bones and wearing hats with character. The front row are crouched in the typical bushie pose that Dad always took up when waiting for something. Time was I could do it too, but sadly I’m no longer that flexible or agile. The pipes remind me of my grandad who would sit on the back steps of their house tapping the tobacco out, refilling the pipe then having a quiet smoke, looking over the back yard.

The Darling Downs is the lime green area on the bottom right.

While these men would have probably given anyone in need a hand, you can’t help feeling you wouldn’t want to meet them on a dark night. I’d place a good bet too that many, if not all of them, were returned service men from World War I. If you recognise anyone in this group, please do comment as I’d love to know about it.

It looks to me like a silo behind the men, which would fit with it likely being taken on the Darling Downs. To the right is a typical old Queenslander house, on stilts, with its two tanks and no doubt a slow combustion stove to cope with the chilly weather typical of winter on the Downs.

Gallop over to see how other Sepians transported themselves this week.

28 thoughts on “Men of the Queensland Bush: Sepia Saturday 249”