My A2Z 2016 theme is how to pursue an interest in family history/genealogy – I’d love you to join me on the journey.

N is for Newspapers

Once upon a time, in those dark, pre-digital days, I wore my eyes out looking at microfilm after microfilm of newspapers like all good family historians.

One clue led to another as we would weave our way from archive sources and BDM indexes to and from the newspapers. Imagine the time it would have taken to roll through page after page sleuthing for anything else, though occasionally we dabbled in that.

We still ask these questions in our research, but what we had no hope of finding before was those blissfully random stories that we can now find, thanks to digitisation. For example, an advertisement by my 2xgreat grandmother looking for her sister; family in the old country seeking “missing friends”; the story of an agricultural show where one great-grandfather exhibited a range of local timbers and another’s baking took out a prize.

And then there are the advertisements for claimants to estate like this one, or the astonishing 50,000 names mentioned below. You can see that there’s plenty of US news in Australian newspapers. 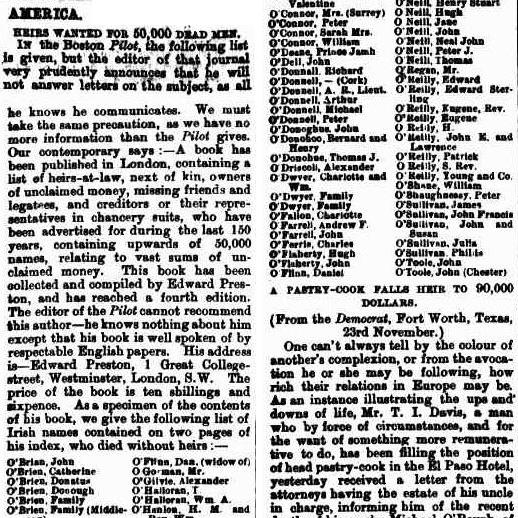 Most nation’s have digitised at least some of their papers, but I honestly believe Australia’s program, Trove, is a world leader for all sorts of reasons: crowd-sourced editing of the OCR (Optical Character Recognition); providing highlighting of the search words; and the ability to tag or include in a list to suit your own research. Family historians, as well as academic and ordinary researchers, use it to research a wide variety of topics from life-saving clubs to dolls’ houses.

Incredibly our national government thinks this is not a priority to fund and thus diminish the preservation of our national heritage. There’s been a concerted social media campaign (#fundtrove) on Twitter and Facebook to fight this.

A few other online newspaper collections are as follows:

I’ve found some German newspapers available through Google Books – they’re very difficult to use but perhaps my tips from an earlier post may help.

Papers Past (for New Zealand)

The Scotsman (a pay-to-view site)

What others would you add? Thanks to my readers for these additions. Also read the comments for further tips, now included below.
Welsh Newspapers Online

While these focus on papers from their own country/region you might be surprised how often they reference events in other countries (the equivalent of an AAP syndication).

If I had to limit myself to one online resource I think it would have to be digital newspapers. Other records are available elsewhere, but the intimate stories in newspapers about ancestors are so random and found almost entirely thanks to digitisation.

For some handy hints on searching online newspapers try these tips from Ken at The Ancestor Hunt blog.

Thank you for visiting me on this journey. I love comments <smile>

There’s a plethora of reading choices on this year’s A to Z Challenge, so my challenge to you is to visit the sign-up page and select one (or more) blogs to read between the numbers 1500-1599.

32 thoughts on “N is for NEWSPAPERS”