Many years ago, I found occasional references to my great-uncle Peter McCorkindale on microfilmed newspapers. It was apparent that he regularly “smashed” the competition at various Highland Games. While I’d written a blog post about the McCorkindale pipers a long time ago, I’ve recently found even more on Trove.

That’s what happens when I putter away on the McCorkindale section of my database and turn to Trove for more details. The best bit is some of the photos I’ve found. Peter Sim McCorkindale (1877-1945) was the second eldest son of Duncan McCorkindale and Annie Sim. Born in Glasgow, Peter emigrated with his older brother, Duncan, in 1900. Both made their marks in the Caledonian societies Down Under.

What is both intriguing and puzzling is that Peter’s role as Pipe Major comes and goes over the decades. At present I have no idea how that position was determined. Also intriguing is that his brother Malcolm appears as Pipe Major in some stories. My Dad always said Malcolm was the better piper but he suffered from performance nerves.

In earlier years, Malcolm is shown to be the Pipe Sergeant of the Brisbane Caledonian Society and Burns Club Pipe Band.

Malcolm (and Peter) also won a number of prizes at different Caledonian Events.

What I hadn’t appreciated previously is that there could be substantial prizes to be won in individual events. While two pounds may not seem much now, it would have been worthwhile at the time. It may well have been another way to bring in funds for their young families.

Peter McCorkindale also seems to have been a regular performer with Monty Bloom’s concert and vaudeville group which gave hundreds of performances to a wide array of gatherings from prisoners to old people’s home, charities and hospitals. Peter was also scheduled on the radio at different times – how I’d love to hear a recording! I can imagine my grandmother listening in and bursting with pride in her big brother. No wonder Dad also said the family had trouble with accommodation in Glasgow with all those boys practicing on their pipes! 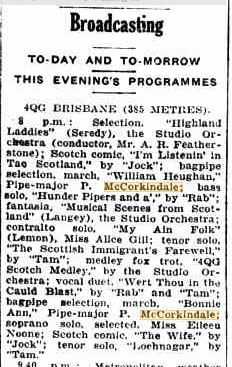