This series of blog posts is part of the A to Z 2019 Blogging Challenge in which I will write snapshot memories of my early married life in the then Territory of Papua New Guinea.

Imagine if you will a country with spectacular, awe-inspiring scenery from fierce mountain ranges clothed in almost impenetrable jungle to deep aquamarine seas with an abundance of tropical fish.

Imagine a country with hundreds of tribal groups, over 800 languages and specific cultures.

Imagine the potential for clashes between those tribal groups, the payback and potential for inter-clan fighting, and the translation of traditional sorcery into the recent horrors of witch-burning.

Imagine the variety of costumes and sounds when thousands of warriors come together from diverse places for a sing-sing, or music and dance. Where even other clans and tribal groups look on astonished at what they’re seeing.

The presence of Prince Charles and dignitaries from PNG and Australia.

The gathering of tribes and sing-sings to celebrate.

The solemn and respectful lowering of the Australian flag at Hubert Murray Stadium.

The high school students in colourful costumes on Independence Hill 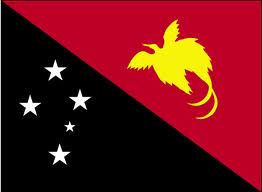 The Southern Cross on a night sky of black.

The sound of aircraft at the fly-over.

You can read the original story along this theme here and about out Independence experiences here and here.