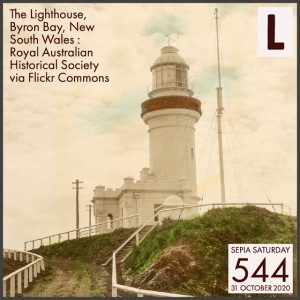 This week’s Sepia Saturday image brought to mind many trips to see the Cape Byron lighthouse. In particular I was reminded of a weekend there with colleagues at work. Little did I know at the time there may have been an indirect family connection, and we may even have been staying in the same lighthouse keeper’s cottage.

But I digress, so join me in learning more about life on a lighthouse, some fairly central like Cape Byron, others remote in the ocean, living in relative isolation and self-sufficiency. Without a doubt these were strong, independent men working as lighthouse keepers but their wives and families must surely surpass them for courage and resilience. Montague Island seems to have been one of the more challenging posts, along with the appropriately named Solitary Island lighthouse. Stories from news articles reveal the challenges the families faced and while the implications are that the families lived in harmony one can imagine there would be times when tensions would arise between the men, and also the women, but the demands of social support must have outweighed these periodic stresses. As the article below says: Those people who like living on lighthouses think the life the best possible. And there must surely have been some compensation for living in a very natural environment rich with wildlife as this article demonstrates: fairy penguin rookeries and seals.

And when the weather turned bad the families had to adapt and make the best of things, stretching their food supplies and killing wild goats.

The most exciting article I found as I trawled Trove is this one about a related family of mine. How amazing to have a word-of-mouth description of the family’s life.  The mother was quite right to be concerned about her children and the snakes, because unbeknown to her, the kids were capturing snakes and selling them.  You can read the whole story here since the images are not all that clear.The family’s oral history says that Mrs O’Brien turned on the Cape Byron lights when it became automated in 1986, and this article explains that her husband, James O’Brien then Head Lightkeeper, turned the switch when it was converted to an electrically operated light in 1959.

And here is another article on Lighthouse Families.

Why not row over to see what other Sepians have shone their light on this week. 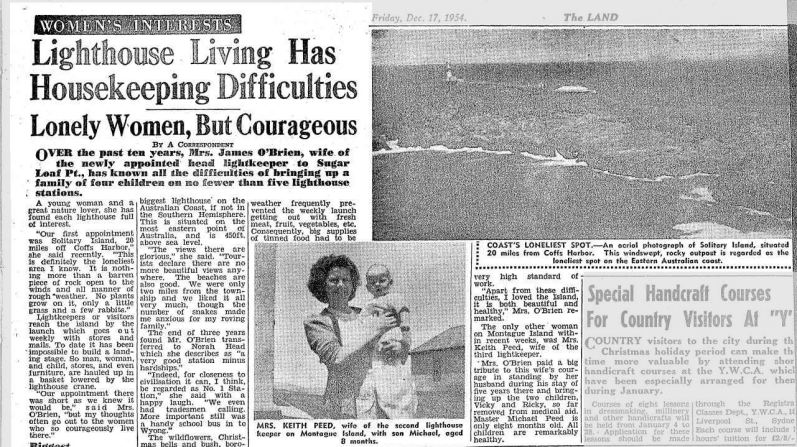