We all know the joys and benefits of blogging but just how effective it can be is brought home from time to time. Among my comments recently was this one from Claire, representing the Blacktown (Sydney) Computer Pals, a group of people who are learning IT skills by doing a project which their tutor Mick has said has taken on a life of its own.  I’ll let Claire explain it herself:

We are a group of seniors in a Computer Pals Club. We have a small notebook from WW1 with 24 signatures of returned servicemen who called themselves “Boys of the Old Brigade” 2 of whom are:- Kenneth Norman Kunkel and Mathew David John Kunkel. We have researched some of their military records from the National Archives of Australia & The War Museum & have found that Mathew came from Springbluff & Kenneth came from Toowoomba. We are trying to make up a booklet reuniting these men. Ideally we would like photos & details of the battles they were involved in. Your help in this project would be very much appreciated.

Australian Mounted Division Train resupplying water. Less than a month after this notebook entry Ken Kunkel injured his back in a fall from just such a water cart. AWM Image B02703 out of copyright.

It further transpires that the notebook came to Mick, the tutor, whose great uncle, Alan Wilson, owned the book. Luckily Mick was able to save it from being dumped after Alan died. It also contains pressed flowers.

I offered the Computer Pals group the chance to spread the word about their project via my blog so I’m going to list the names in this WWI notebook (which included pressed flowers) here and hopefully it may flush out some interested family members. If any of these names are your relatives, or you know who they are, could you please leave a comment, and with your permission I’ll pass on your details.

Here are the names of the men who signed the notebook with links to the ADFA AIF site:

Any thoughts, please comment. Here are a few from me.

The Lancaster entry doesn’t seem quite right to me, and he is also different from the others because he’s a sapper. I’ve tried comparing some of the signatures in the book as compared to their attestation papers at NAA and there are some differences…not surprising I suppose. 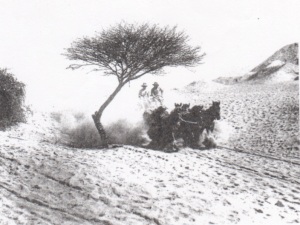 An Australian Light Horse team raises the dust on a road in the Jordan Valley near Jericho. AWM Image B00230, copyright expired.

I’m trying not to do the BCP research for them, as that’s part of their learning strategy. However my observations are that the vast majority of these men seem to have been appointed as Drivers with the ANZAC Mounted Division Train in late 1917. This makes it likely that they were involved with the offensives at Gaza and also Jericho. The Unit’s War Diary for February 1918 is here, and the story of the advance on Jericho is here and an ADFA summary is here. The unit’s engagement at Jericho apparently ended on 21 February 1918, and the date for the signatures is 22 February 1918, which makes me think it was some form of team bonding/memorabilia after the battle.

There are diaries by Sapper Edward Bradshaw and Trooper Jeffery Thomas Holmes from the Australian Mounted Division which cover this period and reveal details of their daily lives and work. Both diaries are held by the Australian War Memorial…next time in Canberra.

Apart from the fact that this is a great project, it’s also exciting for me at a personal level. Matthew David John (John) Kunkel and his younger brother Kenneth Norman (Ken) Kunkel, were my grandfather’s younger brothers. Both went to war together, along with a couple of Gavin cousins, and both returned safely together. I knew they’d been in the Middle East, and yet somehow it seems amazing that they had been to the old biblical scenes. Were they impressed and intrigued I wonder (their parents and grandparents were all devout Catholics) or were they simply caught up in the war itself.

So, over to all of you. Let’s see how blogging can help this group make connections with the men’s families as they have with the Kunkel men.