They say “two is company and three is a crowd” and there are times when that can feel quite true. Growing up as an only child, it was easy at times to feel odd one out, or conversely to lend allegiance to one or the other parent: a triangulation of emotions. Envy of those with siblings, bouncing around them like puppies, was not uncommon and yet, once accustomed to, a change in the sibling status would have been a shock to the system, however much wished for or welcomed.

On reflection it seems that the number three was destined to play a significant role in my life.

Throughout high school I had two best girlfriends to share the highs and lows of those teenaged years in an all-girls school. 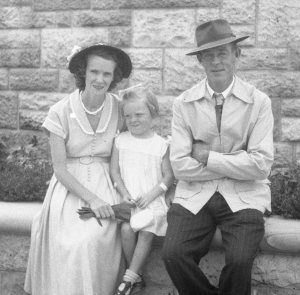 Different tertiary paths eroded the friendship but two of us remained, and a new one was added –the boyfriend, now husband. Broader friendships were formed but at the core those two.

Then over the years we were to have three daughters to brighten our lives and keep us on our toes.

Now we have three grandchildren, delightful all, with the gender distribution changed to two boys and a girl.

Isn’t it strange how “fate” follows you around, and in my case, three has been a recurring theme. Comparing these photos with the Sepia Saturday one, it struck me that in mine, the balance is different: the youngest has centre place in every one with the older family members providing a protective barrier.

Why not have a look at what other Sepians have had to say about threes.