Have wondering where I’d vanished to? We have been adventuring in Kenya, Tanzania, and Uganda, spending time with two of our daughters, one of whom lives in Nairobi, and seeing all sorts of wonderful animals from A to Z. We had a great time of it but must admit to being a little weary after the adventures.

We found the Kenyan people so friendly and engaging, and also very keen to better their lot in life. We who are used to conventional shops for all our necessities, or even our wants, were amazed by the sheer variety of products available on the roadside, each little stall or activity run by an enterprising individual. Admittedly we had flash-backs in part to visits to Bali over the road-side furniture manufacturing and stalls, but there were still significant differences. Whole stretches of footpaths had become garden pot sales areas, or mini (or not-so-mini) plant nurseries.

Two dozen roses for about $5 is a good deal.

The abundance of roadside flower stalls with utterly magnificent roses and all manner of cut flowers was such a temptation, and while as a tourist one can’t usually take advantage of such things unless staying put for a few days, we were spoiled by seeing great arrays of them in our daughter’s home, and for a ridiculously cheap cost. Did you know that many of the flowers you see on display in Europe’s hotels and restaurants come from Kenya, especially near Lake Naivasha where the poly-tunnels are huge? Neither did I until the impact of the Nairobi airport fire made it clear.

The airport fire occurred about a month before we were due to arrive. It was certainly different to be processed by immigration in a marquee, though by the time we returned from Zanzibar, the newly built multi-story car park had been transformed into a very efficient arrivals hall. Having checked in, cleared immigration, and with “no guns beyond this point, on our outgoing flights, we headed for our departure lounge, which for each flight remained in a marquee or large tent, rather making me wish I’d dressed more casually given the heat in the confined space. We were taken by the inspirational signage near the baggage bays saying things like “every bag you lift raises Kenya up”. Not sure the men who unloaded the bags the first day were quite “on the page” with that one though <smile>.

Business is done in all sorts of places, with little grocery and clothes shops everywhere. I saw quite a few micro-finance lenders’ offices which of course reminded me of Kiva. I’ve previously been reluctant to provide loans to those simply on-selling goods, but now I realise just how critical this is for people’s economic survival. I’ve also wondered from time to time why teachers might be applying for loans when they already had good jobs. That question was answered for me by a friend who is working as a teacher’s aide in Uganda. The monthly salary is an absurdly low amount and much lower than other career options. A gardener in a unit complex might have a reliable job, but his wages are very low and any medical expense, or the cost of a family funeral, will play havoc with the family’s budget and savings.

And so, with a fair bit of credit in my Kiva account from repaid loans, I’ve made several loans to hard-working Kenyans. If you feel motivated to join Kiva, you don’t have to support Kenyan loans, but do have a look at the Genealogists for Families Team to see just what great work has been done, in a very short period of time. Full credit to Judy Webster for setting up this team in honour of her father.

Another reason for providing our support for Kenyans on Kiva right now, is that they will be doing it tough as the economic impact of the Westside mall terrorist attack hits home. Sadly it’s likely that it will also impact tourism numbers to the country and ordinary Kenyans, working hard to provide for their families, will suffer. We were in Nairobi, staying less than 500 metres away, when the assault took place so it was very much “there but for the Grace of God” for us. Sadly 67, or more, people were not so fortunate. The knock-on effect will be huge as people curtail their trips to the shops and stay out for shorter times. Everyday Kenyans rallied to support those injured in the attack, or the families of those who were killed, with their prayers, support and blood donations, irrespective of their religious affiliations. 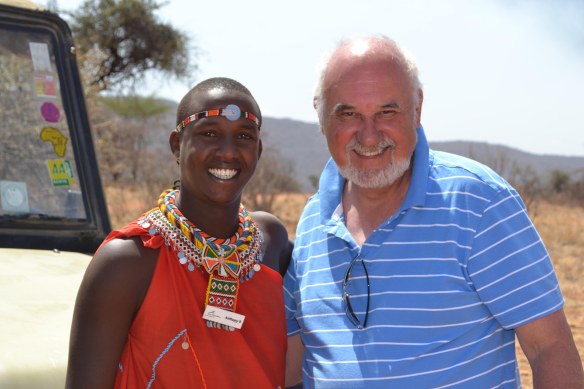 Mr Cassmob and one of our Samburu guides, Anthony.

Our final safari, to Samburu, overlapped with the final days of the siege and the guides were already concerned about the impact on their livelihood. We can honestly say that the siege did not ruin our enjoyment of Kenya and all it has to offer.

Ordinary Kenyans were so inspiring with their commitment to learning more (languages, skills etc) and improving their lives. We would visit again tomorrow – after we catch up on our sleep.

So if you’re on Kiva, or if you’ve been thinking about joining, why not provide your support to Kenya at this difficult time and show the people the world is thinking of them. The image on my sidebar will take you to Genealogists for Families.

In the coming weeks I’ll be posting photos and stories from our Kenyan travel on my other blog, Tropical Territory and Travels, and you’ll soon see why we absolutely loved this amazing experience.

8 thoughts on “Kenya and Kiva”