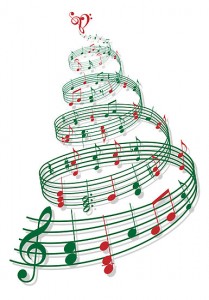 The prompts for the Advent Calendar’s Christmas Music topic are: Christmas carols, church music and even more modern novelty songs are all a big part of our Christmas memories. What songs were your favorites as a child and are they still your favorites or do you have new ones? What about your parents or family members – were there certain songs or types of Christmas music played during the season? And how would you describe the type of Christmas music you like?

My grandmother owned a gramophone (which I’ve now inherited) but I don’t recall her having any Christmas music for it – perhaps that was to do with her more serious Presbyterian upbringing. I guess we listened to carols on the radio but to be honest I have no clear memory of doing so. It was at church where carols were sung, old favourites like Adeste Fidelis and Silent Night.…there wasn’t a lot of musical diversification, and the very religious hymns were the staff and clefs of Christmas music (well I couldn’t say bread and butter, now could I?).

Nor did we have a parish choir to lead us, in contrast to the rather grand choir we heard at Christmas Eve Mass in Lucerne in 1989.  The rise and fall of voices and the grandeur of the organ were a huge contrast to our usual experiences. Another form of music happened after Mass, as well as on Christmas morning. The pealing of bells around the lake is a distinctive memory which seems to fit perfectly with a winter’s day. In Australia church bells are rarely rung, and I suspect there’d be riots if the bells pealed across the night sky at Christmas.

Mum was always a great one for singing around the house so I guess that would have happened at Christmas, yet I don’t remember it specifically at Christmas – perhaps just the fabric of day-to-day life. I was pleasantly surprised to learn that she’s just been taking part in the choir at the retirement village where’s she recently relocated. Unfortunately I didn’t inherit her singing voice but at least I knew the rhythm and words, unlike Dad who was tone deaf.

When I passed Junior (Year 10, aged 14) I was given a portable record player as an achievement present. This opened up our musical repertoire and I remember clearly hearing Oh Tannenbaum for the first time and being thrilled that I could make sense of some of the words, thanks to my German classes. It was a thrill to be able to listen to whatever music we liked whenever we liked. Mum was particularly fond of Bing Crosby’s White Christmas.

One of our earliest Christmas LP purchases as a married couple was Nana Mouskouri’s Christmas record and I fell in love with Little Drummer Boy and Mary’s Boy Child. Feliz Navidad entered the family’s music lexicon quite a few years later and I love its exuberance and sense of celebration.

In some respects my Christmas music preferences have reverted to their origins. My favourite music is now the Hallelujah Chorus from Handel’s Messiah, Joy to the World and serious choral performances like the album we have of the Oxford Boys Choir.

We store our Christmas CDs with the decorations, so once the tree goes up (which will happen this weekend) we will bring out the CDs as well and start playing them. The two go together because our family tradition is that carols must be played as the tree is decorated.

This post is part of the Advent Calendar of Christmas Memories (ACCM) which allows you to share your family’s holiday history twenty-four different ways during December! Learn more at http://adventcalendar.geneabloggers.com.