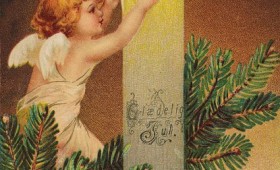 Initially I was disinclined to post again on the topic of Christmas cards as I wrote this story back in 2011. Then I started thinking about the background of card-sending and the potential importance to family history.

I’d guess that in most families there’s at least one person who writes to every member of the family as well as friends, each and every year. In my family that would have been my Aunty Mary who faithfully sent cards despite the ups and downs of her own, or the recipients’, lives that year. Certainly she was a family lifeline through some difficult years for me.

A page from my grandmother’s address book.

Another distant, fourth, cousin also sends out masses of cards, keeping up the links with extended families both in Australia and overseas. This is the cousin who broke open my links back to County Clare with my 2xgreat grandmother Mary O’Brien. Nora’s family were master achievers of staying in touch with family and had all the oral history as well as relatively current contacts.

Nora is also the one who holds a vast repository of family and friend photos, just like the one I posted recently for Remembrance Day. This led, as chains of thoughts do, to the reflection that in days past families, and friends, would sometimes (often?) send family photos together with their Christmas cards. So, have you thought about who might have your family’s photos as a result of Christmas-card exchanges?

Aunty Mary’s diary became her address book. What’s interesting about it is that includes a list of saint’s days in the front.

When my Aunty Mary died I helped to clear out her house, and to salvage any genealogy-precious items like photos and certificates etc. Among her things was her own address book and a couple of my grandmother’s. These would have been their source when they started sending out their cards each year, just as mine is my memory-check. If you’ve been lucky enough to inherit a relative’s address book have you tried to identify who each person is/was? And maybe think about making contact to see if they have any family photos?

Christmas memories may be about our own and our family’s lives but they can also open the gate to further family history research. One idea I’ve taken away from reading various posts is that I want to write a Christmas card with a special message to each of my grandchildren, each year. I still have a couple of cards my own grandmother gave me, and it’s precious to have her greetings handwritten in my card. She had a quirky way of signing on cards – she always wrote across the corner, diagonally, on the inside flap. Perhaps because in those days cards were often used for craft.

This post is part of the Advent Calendar of Christmas Memories (ACCM) which allows you to share your family’s holiday history twenty-four different ways during December! Learn more at http://adventcalendar.geneabloggers.com.