This week’s Sepia Saturday 245 is all about men larking about, perhaps with a wee drop of whisky in the background.

My images today date from a serious aspect of our nation’s history, World War II, but it’s also obvious the men weren’t on the front line and were having a fine time larking around. This series of photos is from my aunt’s photo album which I inherited. Her husband, Pat Farraher, was a cook with the Army during the War and I wrote about the serious side of his story back on Sepia Saturday 180. 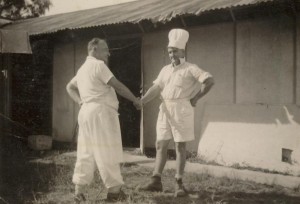 In the photos Pat and his mates are having a play stoush, doing the seemingly-inevitable rabbit ears behind a mate and generally having a light moment or two with or without the wee dram. I don’t know whether the photos were taken at Enoggera barracks in Brisbane or somewhere in Papua New Guinea, but my guess would be the former except in the final photo. Seriously, would you trust these men with the nation’s security?

I wonder how other Sepians have responded to this challenge? Do their photos reveal lurking, posing, drinking or sharing?

18 thoughts on “Skylarking in the army”