As the generations pass away behind us, we inherit bits and bobs that were once owned by family members. We may also have gifts that we’ve kept over the years because a much loved relative has given them to us. Unless your family was well off I think of these items as keepsakes – they evoke the person who owned them or who gave them to you, and they often have little monetary value. For example, there are decorative items of my mother’s or grandmother’s that are not to my personal taste but that I may keep just because they take me back to childhood times.

For me, heirlooms invoke thoughts of expensive items bequeathed from generation to generation. At first thought I have few of these but perhaps I do even though they don’t have great financial value. The reality is, the further back we go to our immigrant ancestors, the fewer items we’re likely to have. Most came in on government assistance schemes, had little money, and brought little with them. While they died they may have left something to their families, but where those items ended up may be anyone’s guess.

Keep all special thoughts and memories for lifetimes to come. Share these keepsakes with others to inspire hope and build from the past, which can bridge to the future. Mattie Stepanek, author.

I have quite a few keepsakes from my paternal grandparents – one of the advantages of being the only child of an only child, I guess. Most have very little financial value but still I remember them from when they were in my grandparents’ house.

My grandmother’s silver mirror was among the silver items I used to polish for her regularly for a bit of pocket money. In due course it may become an heirloom as I’ve bequeathed it to my only granddaughter and talked to her about the history.

Perhaps more in the heirloom category, though not in value, are the silver spoons which came from my great grandmother. I assume they were part of her trousseau as they are engraved with the initials of her maiden name. I should really put out my small book on silver hallmarks and work out the date of manufacture.

I have little keepsakes from my maternal great-aunt Emily, who used to give me teacups for my birthday or Christmas or Easter. They remind me that she was like a grandmother to me when mum’s mother died young.

Some things you touch, or even just see, and they take you back years to a time and place with a particular person.

Mr Cassmob also has some keepsakes from his grandparents eg an ivory cribbage board and some glass bowls.

I wonder which of our belongings and nick knacks, will be touchstones of memory for our own children.

Among the emotional “treasures” I have are my paternal grandfather’s medals from World War I and the fob watch, very simple, which is engraved with his father’s date of death, Christmas Day 1901. I’d love to know whether it had been a gift on that day, or if he had it engraved himself in memory of his dad. Had I never researched the family history I’d have had no idea of the significance. 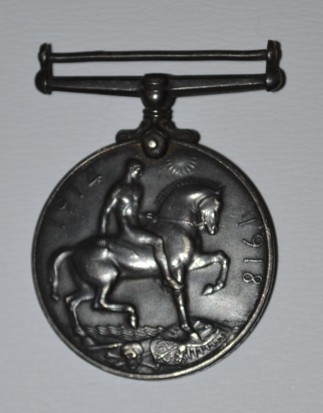 One of the heirlooms I’ve now got it my grandparents’ gramophone which holds so many memories of happy times listening to old music with them. Or my grandfather’s blanket box which I’m told he used for his belongings when being moved around by the railways. In my dreams it has a more distant history as it looks very like the trunks that the immigrants brought with them but that’s all it is, a dream.

And what of books with inscriptions from when grandparents may have won a school prize. What “value” do they have?

As I said before, items with little intrinsic value can be of significant emotional value just because of who they belonged to, and their relationship to you. I reflected on this some years ago with this post.
With the Marie Kondo movement to declutter your home and the reluctance of the “younger generation” to take on the work intensive silver and crystal, how do we prioritise what to keep or even whether we keep it at all?

I found this book, Downsizing with Family History in Mind by Devon Noel Lee and Andrew Lee, helpful in clarifying my thoughts on the keeping of keepsakes or heirlooms.

How do you handle your family’s “treasures” and decide what to keep?

14 thoughts on “Keepsakes or Heirlooms?”