“What the world needs now is love, sweet love”[i]… Perhaps that’s more true than usual in these uncertain times of a pandemic. However, we’d probably mostly agree it’s what all of us hope for in our lives, whether it’s platonic, passionate, familial or of friends. Certainly, in my own life one of the key gratitudes I have is for the love I’ve received from Mr Cassmob, my family and my friends. Love makes life so much richer. The rosy glow of early courtship may pass but with luck the love continues and a happy life ensues – not one without its ups and downs, but overall satisfying. 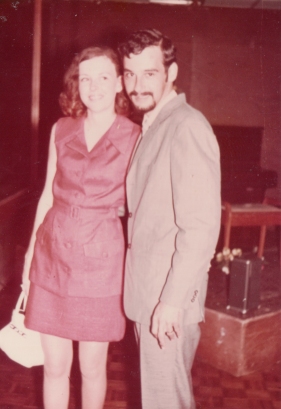 When researching our family history we often start looking for marriages to follow the ancestral lines of those who begat us. For me, that’s the bare bones of genealogy – the framework on which we pin the names and dates of those who’ve been pivotal to us being on earth. What comes next is building up the stories that we find until we get some sense of them as people. It seems strange in some ways to think of them in that first dizzy dose of love, but one assumes that they probably felt much as we did when it happened to us. Some cases may have been pragmatic decisions of religious or personal compatibility, financial stability, loneliness and distance from family and those factors may have played a part in their relationship. Unfortunately, without a diary or journal we have no way of getting an insight into their love. So, we are left looking at the photographic newspaper records of the wedding and the celebrations by friends and family. Longevity of marriage might be relevant, but not necessarily an indication of love’s endurance.

This 1910 wedding of one of George & Mary’s grandchildren was held at their home at Murphy’s Creek. William Kunkel is the young lad on the left. This family had lost both parents within six weeks in late 1901. Photo kindly provided by a family member from this branch.

Unfortunately, the anticipated happiness and compatibility doesn’t always happen, love disappears, and the marriage falls apart. Desertion, domestic abuse, bigamy or divorce may follow. In the earlier days of “blame game” divorce, the story of a marriage’s disintegration was played out in court and in public through the newspaper coverage. Trove certainly brings all the lurid details to light, but we do have to be careful when researching these stories, especially if you don’t know which of the local newspapers are likely to be scurrilous or salacious. It always pays to read each and every news article to distil the data and the anomalies. Let me give you one example from my extended family.

Agnes Eileen Cronin[ii] married William Thomas Kunkel on 27 October 1915 at Toowoomba: she was 19 and he was 23. The marriage apparently fell apart and Agnes left the home in 1921, relocated to Brisbane and changed her name to Dorothy Edwards. She subsequently bigamously married a man called David Scott telling him she’d been born in Toronto, Canada (not Queensland), and her father was James Edwards, perhaps to explain why she would have no kin at the marriage. Kunkel filed for divorce in early 1929 and it came before the court in April 1929.

Anyone from Brisbane knows the reputation of the old “Truth” newspaper which definitely falls into the scurrilous category. The reporting was sensational bordering on hysterical. The defendant’s barrister claimed that Agnes had been forced to marry William when she was 15 and that he was 20 years older, as well as making assertions about his character and behaviour[iii].

Other newspapers carried more considered reports of the trial but one of the interesting things, to me, is that William’s photo was used in many of the articles. It was if he was the one under judgement and not his wife being tried for bigamy and desertion. Different reporters focused on some different points or added extra from the trial that had not already been reported. In a strange twist to the tale, Agnes’s mother even defended her son-in-law saying that he’d never known him to strike his wife and that the separation had arisen from money matters.

After much to-ing and fro-ing, including referral to the Attorney General, the divorce was resolved in William’s favour. The couple’s respective ages at marriage were formally recognised by the court and Justice Macrossan acknowledged that William’s reputation had suffered as a result of the mis-reporting[iv]. The decree nisi absolute was confirmed in November 1929 and soon afterwards William remarried. Both Agnes and William must have been relieved to have this behind them and for their “dirty linen” to no longer be broadcast through the news and a general topic of conversation in the community. I can find no reference to Agnes after the divorce under the surnames of Cronin, Kunkel, Edwards or Scott, nor any trees on Ancestry. I wonder what her daughter was called and where they went to live after the divorce. Did Agnes change their name again?

I suppose I’m a tad biased myself and feel for William, one of my grandfather’s younger brothers. He lost both parents within six weeks in 1901 when he was only a lad of nine. Later his son Robert would be Missing in Action in Korea, never to know what had happened to him.

While Rod Stewart’s advice on the matter of love and the law is pertinent to this case, perhaps it’s not very wise:

Only a fool permits the letter of the law to override the spirit in the heart. Do not let a piece of paper stand in the way of true love and headlines. Rod Stewart, Scottish musician.

When you discover something like this through Trove, it is worth following up in the official documentation of the court[v] and the judge’s notebooks[vi] where they have survived. I’ve done this with my grandmother’s divorce following the story in the news but more importantly in the trial documents.

The departure of love and the involvement of the law is sad and can be a human tragedy. We need to feel empathy for our family members and treat their misfortunes with respect.

Have you seen examples of great love, or the loss of it, in your ancestral families?

Have you acquired a list for post-isolation research, as I have, while doing your A to Z challenge or reading?

[i] A popular song from 1965 with lyrics by Hal David and music composed by Burt Bacharach. First recorded and made popular by Jackie DeShannon