When I list my gratitudes, it would not occur to me to count money, in and of, itself. And yet, things I am grateful for definitely require a level of financial security, and before I retired, it would have included a good job with a decent salary. So yes, money does matter. It’s given me the roof over my head, transport to move around, food on the table and in the pantry, an education, books and the opportunity to travel.  I’ve been very fortunate indeed. 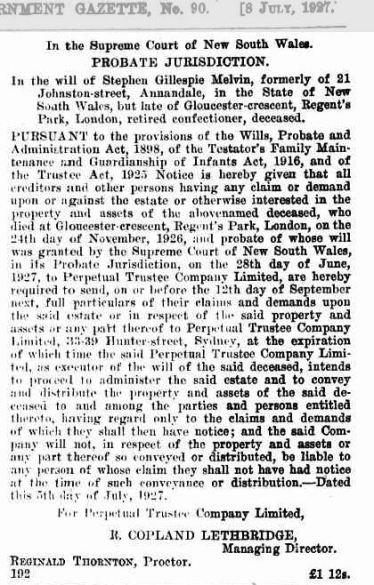 It’s fair to say that affluence has not been part of my family inheritance given my working-class background. Only one ancestor came close to passing on his hard-won wealth. Stephen Gillespie Melvin, my maternal great-grandfather, started his life in the hard streets of Leith, the port for Edinburgh. After he emigrated he built up his business through his skills as a confectioner, then got himself in strife thanks to thinking he could dabble in coal mines….seriously?! He rebounded and moved to Charters Towers establishing a successful business before moving to Sydney in later life. Over the years he travelled back and forth to England, and possibly Scotland. I attribute my love of travel and chocolate to his genes! When he died, he left a sizable estate but had decided to leave it to his grandchildren after the death of all but one of his children. In the interim, he left the property and estate in the care of a trustee company. It may have seemed logical enough at the time but in the forty years before they inherited, the value of his assets had diminished significantly. Nevertheless, when the time came round, the bequests certainly benefitted his grandchildren, and their children. Stephen’s estate shows the importance of searching widely: his will was written in London and was relevant to both Queensland and New South Wales. The conditions and interpretations have been widely debated among the descendant family historians.

I have found no will or intestacy for my other great (or great great) grandparents, Denis Gavin, William or Hannah Partridge, Annie Sim McCorkindale, or George Mathias and Mary Kunkel.

While my great grandfather George Michael Kunkel was “only” a railway worker, he had protected his family by contributing to an insurance policy and benefit societies. When he died, just six weeks after his wife, he left an estate of £433 that would have helped support his young family (aged 21 to 2 years). The estate included nearly £70 in the government savings bank, £200 in a life insurance policy and another £76 in the Railway Service Friendly Benefit. Their living priorities were reflected in the property left behind: £47 for a harness and saddlery and only £18 for household furniture and effects, £3 for a water tank and £12 for a moveable hut.[1] It is sobering when we think of how much we believe we “need” in our own daily lives.

George Michael’s younger brother, Joseph Francis Kunkel, was also a railway worker but he had purchased land at Pickenjennie near Wallumbilla. His estate comprised 149 acres of land[2] with a three bedroom weatherboard house, and a three-wire fence, all valued at £102, cash £1, five horses £8, six cows £6, 10 steers and heifers £2/10/-, a dray and harness £5 and household furniture of £5.[3] There were severe drought conditions in the west at the time and before the administration of the estate was finalised, four of the horses, two of the cows and four of the heifers had died, significantly affecting the value of the estate. The debts for the estate totalled £60/19/- and included medical and legal expenses as well as what appears to have been the cost of the timber from building the house.

Although I’ve found no will for my great-great grandparents, George Mathias and Mary Kunkel, this is probably because he had already transferred the family property at the Fifteen Mile to his youngest son, Edward. Dad told me that his father, Denis, the eldest grandchild of the eldest child, had been offered the property but had declined. Hence at death there was no transmission of property by death and there would likely have been only a small transfer of money involved with probate not required.

Searching Trove’s newspapers and Government Gazettes can reveal probate notices for your ancestors’ estates. Failing that, you may find the sale of property being advertised after the death of the family member. This is how I learned about Peter McSherry’s (my great-grandfather) property in Rockhampton. Any of these successes will help unfold more stories of your family. You’ve got to love Trove and all it’s offered us….I go back to the pre-Trove era and trust me, it has been a world-class addition to our research tools. Do make sure you register and use the tags and lists facilities to keep track of your research – you can even make them private if you wish. And while you’re there, why not make some text corrections, and give back.

I love discovering wills, intestacies or deceased estates because they can give you wonderful insights into your families’ lives. I’ve been fortunate with some English and Scottish wills but from the distant past. And don’t forget -it’s not all online – head off to the relevant archives to see the documents for yourself. Touch your ancestor’s words and signature – it’s a privilege and a buzz.

Once again, our friend Trove comes to our aid. It’s hardly surprising, given the challenges of new colonies, precarious government finances, and severe weather conditions, that so many of my ancestors (and possibly yours), fell into debt. Add to that their potential lack of literacy skills may have compounded their risk.

My carpenter ancestor, William Partridge, seemed to be in a revolving door to the courts for insolvency. Some of it was probably beyond his control. He cites some of the issues: general depression in the building trade, inability to realise property, pressure of creditors, losses caused by floods in destruction of building material, and by depreciating value of realty.[i]

Family stories had indicated that George Mathias Kunkel and family had moved west with the construction of the railway line to Toowoomba, suggesting there was no other work for him. Trove revealed that in fact his Ipswich business had fallen on hard times and his assets had been sold. You can read the story here.

Earlier I mentioned that Stephen Gillespie Melvin (or SGM as I call him), had got himself into hot water in Ipswich, including but not worst, insolvency. You can read more about this drama here. In this case, his father-in-law, William Partridge was on the other side of the insolvency ledger, being owed money and ultimately helping SGM.

It’s well worth searching for any references to your families’ money matters and seeing what emerges.

Have you gained insights into your families’ financial status through researching wills, intestacies or newspapers? 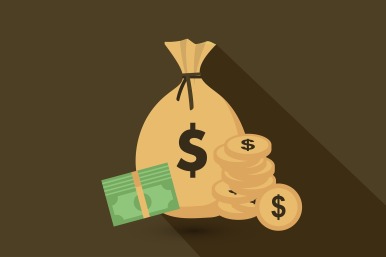