Serendipity (that magic conjunction of different thoughts and outcomes) has been a gift for which I’m very grateful. How else to explain my start in family history? I had been visiting a historical-themed event in William St, Brisbane with our youngest daughter when we came across a tent promoting the Genealogical Society of Queensland. On a whim I decided to join up – I think mainly because I was curious about the origin of my Germanic surname. And there, in that moment of serendipity, commenced a thirty-year love affair with discovering the stories of my ancestors. It’s kept me sane in difficult times and has always presented a challenge or two along the way. Even within this journey there are moments of serendipity where one person’s snippet of information marries up with another and a whole new discovery is made. A whole circle of friendship around the world has come from this journey, as has the opportunity to connect with cousins and family I’d known nothing about previously. What’s not to love?

Serendipity is the stardust sprinkling our research. 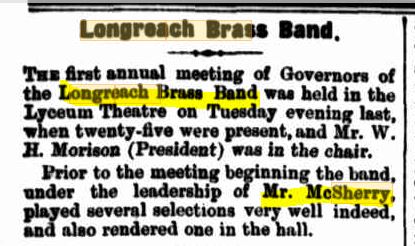 Serendipity is one of the chief joys of our wonderful Trove. Now we can discover family stories that we’d have had no chance of knowing. Previously our newspaper searches, via microfilm, were targeted at the big-ticket events in our families’ lives: births, engagements, marriages, deaths, funerals, obituaries. Suddenly hidden pockets of our ancestors’ lives came out of obscurity. Today I want to share with you some of the skills or talents of my ancestors that I’ve uncovered. Thinking about this topic has made me realise how little we know even about quite recent ancestors like grandparents. I know with mine, they were “elderly” when I knew them (ie about my age now). Even though one set were neighbours, I realise how little I am aware of their hobbies or special things they liked to do. Perhaps I was just being a self-centred child/teenager, or perhaps after decades of working hard they just didn’t have the energy for hobbies.

The concept of serendipity often crops up in research. Serendipity is the faculty or phenomenon of finding valuable or agreeable things that were not being sought. I believe that all researchers can be serendipitous. Akira Suzuki, Japanese scientist.

Are you already tired of hearing about my 2xgreat grandfather, George Mathias Kunkel? We’ve learned that he made wine, was a skilled pork butcher and grew export-quality oranges. But really, how much of that is personal? You’ve read in this series that I interviewed his granddaughter Annie and the stories she’d shared. Imagine how surprised I was when transcribing her oral history interview with Cameron McKee to learn something entirely new about George.

He was a clever man and he could take a pocket knife and carve a thing. We had a pen handle carved from a bone. It was a perfect thing with a folded hand on the end of it like that on the end of it.[i]

It’s a small thing but I was thrilled to discover it. My imagination takes me on a journey to think he may have learned this while on the sea voyage to Australia – or even if he’d been a crew member. Maybe one day another round of digitisation will reveal all.

Cameron asked Annie about their parties and who would provide the music:

Tom Kunkel …. they were up north on the cane farms but the crushing would be finished and they could come down for Christmas. The oldest, Bernard…Tom’s oldest brother, Bernard Kunkel, he played the accordion. Mr Chapman (a local from the earliest days pioneering Murphy’s Creek) played the violin generally.

Annie also mentioned that Tom Kunkel “had a terrific memory and he had an amazing store of good clean jokes, humorous things that happened in his life”. Even recounting this she was chuckling at the memories.

Another of the Kunkels (but which, and where is that note?) was also reputed to tell stories and give poetry sessions at various functions.

Newspaper reports of Agricultural Exhibitions (sometimes called Shows in Queensland) can often provide insights into an ancestor’s talents, skills or interests. This can be helpful for the women in our ancestry as the displays usually included “women’s work”.

I was quite tickled to find this story about William Partridge which evoked memories of a ruler I had at school, made up from different timbers:

Mr. Partridge’s colonial woods were exhibited in a handsome glass case (quite likely also made by him, as he was a carpenter). They were forty-five in number, and represented nearly all the woods of Queensland, and were most tastefully arranged and varnished. One piece of scrub vine particularly attracted our attention; it is twisted, and forms a pretty fancy stand for the table.[ii]

Stephen Melvin often garnered attention for his shop displays or entries in an Agricultural Exhibition:

Of preserves there were but few, mostly well gotten up in small glass tumblers with metal capsules, and looking quite tempting. The successful exhibitors were Mrs. J. Scott, J. A. Jackes, and Sophia Spressar and 8. G. Melvin.[iii]

Mr. Melvin had a very enticing display of confectionery- about the best ever seen here-and there was no lack of purchasers of his toothsome compounds[iv].

At the annual exhibition of the Towers Pastoral, Agricultural and Mining Association, my grandmother, Laura Melvin, then a young girl of 11, was highly commended for her doll with handmade sailor dress and cap.[v] Making doll’s clothes was a love she shared with my aunt who maintained her interest throughout her life and had a wide collection of dolls whose faces she’d “made up” and the outfits she’d sewed. I’m not a fan of decorated dolls but I do like this tiny one that came to me from Aunty Mary – can you imagine the patience that the clothes took to crochet?

arranging. Her attention to detail was precise and every seam (clothes or decoupage) had to be perfectly aligned and matched. She later turned her skills to home handywoman activities like painting and wallpapering. I have plenty of patience for family history, but none at all for DIY.

I was intrigued to find that mum had won a prize when her recipe was published in the Australian Women’s Weekly – thanks Trove![vi]

Without Trove, our family would never have known that Peter McSherry played brass instruments and taught the Longreach band. Similarly, some of the Partridge family also played instruments – yet another skill or talent that hasn’t reached me, sadly.

I’ll leave you with this story of a massive cake made by Melvin and Sons in Charters Towers in 1919…most likely by the sons, since Stephen Melvin had relocated to Sydney by then. Sadly, the text is hard to read but there’s no doubt it was a whopper! Just imagine – six tiers of which the bottom tier was 15 inches in height, and weighed 420lbs. The whole cake was decorated with icing and flags (presumably a patriotic note after the war).  Mr Melvin (which?) claimed it as a record for Queensland having only been surpassed nation-wide by Sargent’s of Sydney. Interested residents were invited to see the cake within the shop because it was too large for the window.

Also true: In reality, serendipity accounts for one percent of the blessings we receive in life, work and love. The other 99 percent is due to our efforts. Peter McWilliams, American Writer.

Have you made intriguing discoveries thanks to Trove or other digitised newspapers?

Did you inherit your ancestors’ skills or talents or have they passed you by?

[ii] Mr. Partridge’s colonial woods were exhibited in a handsome glass case. They were forty-five in number, and represented nearly all the wood* of Queensland, and were most taste fully arranged and varnished. One piece of scrub vme particularly attracted our attention ; it is twisted, and forms a pretty fan<y stand f r the table.

8 thoughts on “Serendipity, Skills and Talents”