The Battle of Brisbane or “Celebrating” Thanksgiving Day 1942

Thanksgiving Day 1942 must have seemed so very strange for the American forces stationed in Brisbane. Not only were they away from their families on what is possibly the most important family date on the American calendar, but the world around them would have felt so strange. Brisbane was approaching summer with blue skies and sunshine. The jacaranda trees would have been in full flower – traditionally exam time for local students. It’s fair to say that most Brisbane people would have had no idea what Thanksgiving was all about, or why it mattered so much to the men. Nevertheless, there were plans to give them a traditional Thanksgiving meal with formal dinners, dinner in the canteen, or at family homes around town.

The Red Cross went to a great deal of trouble for the men so they would feel more at home with turkey, pumpkin pie and plum pudding. I’d imagine they’d have thoroughly enjoyed the meal but I do wonder where all those turkeys came from – I remember even as a child that cooked chicken was expensive and I can’t recall ever seeing a turkey, cooked or live.

During the days, life continued on as usual around town. One Brisbane woman who worked at the American Red Cross, reports “the city was jam-packed with Americans strutting around in fancy clothes. Walking down Queen St (the main street in the CBD) in 1942, I would say there were nine men to every woman, and six or seven of the men would be Americans…The Americans gave presents to the girls and won them over, which was extraordinarily annoying for the Australians”[i]. Many women also worked repairing US service uniforms. Their employment gave them entitlement “to go to the American Red Cross canteen opposite the Gresham Hotel and have your meals.… they had so many things you couldn’t get in the shops like salmon and chocolates and Nestles tinned cream. The boys used to bring us nylon stockings”[ii] The social pressure cooker was bubbling away beneath the surface.

Wherever men are gathered at leisure, and able to have a few (?) drinks, there’s always the risk of a testosterone takeover especially when they’re geared up to go to war. Aussie soldiers, it must be said were very inclined to this social activity. Never known for  being compliant to superior officers unless they were well respected, it could take very little to set them off. On top of which Australians at the time had little inclination to fight with knives or weapons (at least when not in battle) – something which had been occurring in the recent past in Brisbane. Esteemed war photographer Damien Parer is quoted as saying “Those American MPs, the bloody bastards, they always hit first and talked afterwards.[iii]”

And so the scene was set. An American, Private James Stein, from the 404th signal company accepted an invitation to have a Thanksgiving drink with an Aussie soldier at their canteen. He had a leave pass so was confident he would pass muster with the patrolling MPs. Leaving the canteen after a few drinks, he literally ran into an Aussie former soldier, Ed Webster, recently returned from Syria and the Middle East campaigns.

Before it could get confrontational, the MPs intervened and asked to see Stein’s pass. The attitude of the MPs set off the Aussie dislike of authority and they angrily took exception to the MPs. They in turn, unwisely, struck one of the Australians with his baton. It was now on for young and old! He was punched and kicked and then chased back to the PX building on the corner of Adelaide and Creek Streets.

As more MPs got involved and passing Diggers decided to get into the action, it got very ugly very quickly. The MPs called in off duty reinforcements from across the river as the Australians did their best to destroy every window in the PX building. Police were called but the suggestion is they did little to control the mob. Similarly, the Australian MPs, who were only a small group and armed, but without ammunition, did their best to stay out of the melée. A fire engine arrived and the firemen were requested to use fire hoses to disband the crowd – they declined saying controlling riots wasn’t their job.

The arrival of a heavy vehicle and Provosts who’d been armed with loaded riot guns was a red rag to the Australian mob. (It was the 1970s before Queensland Police would carry guns). Norbert Grant, one of the provosts, was attacked by Webster and in the process his gun discharged. Webster was fatally injured though his name was mostly not mentioned in news reports.   Several other shots were discharged and seven others were shot, some severely but not fatally. Another eight were injured by batons. “The use of a shotgun on Australian troops had enraged the rioters.[iv]” Most of the men in the rioting crowd were from the 9th Battalion who had previously experienced heavy fighting in the Middle East and Milne Bay. They were not men to back down easily. “They [the American MPs] picked on the wrong mob, it was the silliest thing they ever did.[v]”

Order was eventually restored that night but feelings ran high in the ensuing days. The canteens were closed and the brownout lifted in some city streets. Despite this gangs of Australian soldiers (rabble really) wandered the streets looking for Americans to attack and when found they would given them a massive bashing and kicking. A disgrace entirely. For some bizarre reason, no decision was made to keep the men in their barracks until feelings might have died down.

Reports of the riot were covered in newspapers the length and breadth of the country and it’s surpising how sometime the most accurate reports came from farther away. However not all were accurate as they mis-reported the name of the deceased soldier and instead included the name of one of the severely injured.

American Lt Bob Firehock is quoted as saying “the Battle of Brisbane was a tragedy that should never have happened”[vi]. I would add that it’s an ignominious episode in Brisbane’s history. So many strategic decisions could have been made differently that might have avoided or moderated the outcome. “The Battle of Brisbane” book provides insights into the attitudes preceded the riot as well as how it might have been handled otherwise.

On a personal note, it’s a strange thing to think of an event like this in my home town. Even stranger that mum was only a teenager working in the city, and well monitored by her father I have no doubt, while Dad was with Queensland Railways, an essential occupation. I know he talked about the event very briefly once, and I took some notes….but where are they? Mum doesn’t recall much about it at all.

In the aftermath, some of the Australian soldiers were charged and sent to prison. The American MP, Norbert Grant, was found not guilty of manslaughter in the death of Ed Webster. 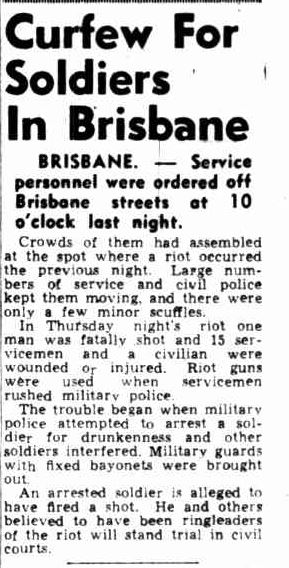 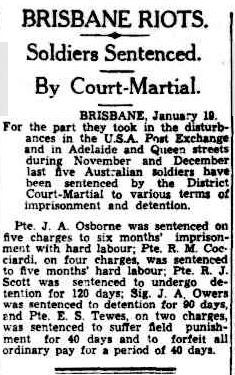 There was no indication in most of the news reports of the nationality of the participants to avoid making it clear to the enemy that the Allies were fighting among themselves. No wonder we love Trove when it opens up so many wonders for us but this one did give me a good giggle.

Those who are interested can follow the articles and photos I flagged in the Brisbane 1940s list on Trove. There are also a couple of interesting articles online:

Australia at War: the Battle of Brisbane has an excellent mud map if you want to orient yourself to the events.

The Battle of Brisbane by Dr Judith Powell

I will also have to look out this book to see if it offers a different perspective.

They Passed This Way: The United States of America, the States of Australia and World War II, By Barry Ralph

I was cheered a little by this image of a square dance in Brisbane for Thanksgiving 1943. A lot more pleasant than the events of 1942.