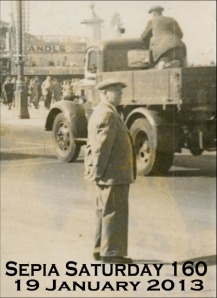 It’s funny how even a cryptic image like this Sepia Saturday prompt can stir one’s memories. After a brief “hmmm” moment my sub-conscious brought forth the connection.

For me this image was a straight path back some fifty odd years.

My image today has been chosen from Australia’s wonderful Trove site. While it dates to 1929, a little before my time, it is out of copyright and so can be used here. There are other later photos which you can see if you click the links below.

When I was a young girl, my family lived on the north side of the Brisbane River and my maternal grandparents on the south (a very Brisbane division). Neither family owned a car so the only way we could visit (even on Christmas Day) was by public transport…tedious but do-able.

On the plus side, the trip only involved two sectors. The first was our local bus, sometimes a trolley bus with feeler-like poles connecting it to the overhead power line, and other times a diesel bus. This would take us to Woolloongabba near the world-famous cricket ground (to the left of this photo). We would cross one of the roads passing through what was known as the Fiveways for its five intersecting roadways, turn the corner, and then wait under the awnings of shops on the left of the photo for the arrival of the tram to my grandparents’ suburb. In fact on other occasions we used the same route visiting my mother’s friends who lived at the end of the same tram line.

In those “olden days” there were no traffic lights whatsoever to coordinate traffic flow through the Fiveways and you took your chances either as a vehicle or pedestrian. The only exception was the railway flagman and the central coordinating point for the trams, looking rather like a clock tower.

As there always is with public transport (or so it seems to me) there was the inevitable time delay between the bus and the tram. Sometimes the railway flagman would provide some distraction as he guided a train and carriages through the same intersection, with his red flag to alert and stop vehicles of all sorts. On other occasions it might be quite dull with nothing much happening. That was when I coached myself into spelling that complicated word Woolloongabba (pronounced Wool –un-gabba), an Aboriginal place name.

From that “authoritative” source Wikipedia, it’s unclear whether the word means “Whirling Waters” or “Fight talk place”. Considering the Gabba’s whitefella way of merging five streams of traffic and pedestrians, either might have been meaningful even to the current day. It’s also apt in terms of those titanic cricket clashes that have occurred at the adjacent Gabba cricket ground. Once again the Gabba played a key part in my own history as my friend and I would routinely visit the Gabba during school holidays to watch test matches or exciting One Day matches against the West Indies (Wes Hall anyone?). You can click the links above to see more images which are still subject to copyright but viewable on Trove.

In more recent years when my daughter lived not far from the Gabba we had regular outings to the Thai restaurant situated in the upstairs verandah of the building on the left.

You can see why, for me, this Sepia Saturday image prompt brought so many memories flooding back.