For Remembrance Day 2013, I’m going to share with you the brief story of a man who has no family connection to me whatsoever. He made himself known through a photograph found in my cousin’s extensive photo collection.

My 4th cousin in Sydney is one of those people who has myriad photographs stored in suitcases – probably literally hundreds of them. Some have names on them, but sadly not all. She has been a wealth of information about my own family but there are also hidden gems of no direct relevance to me. 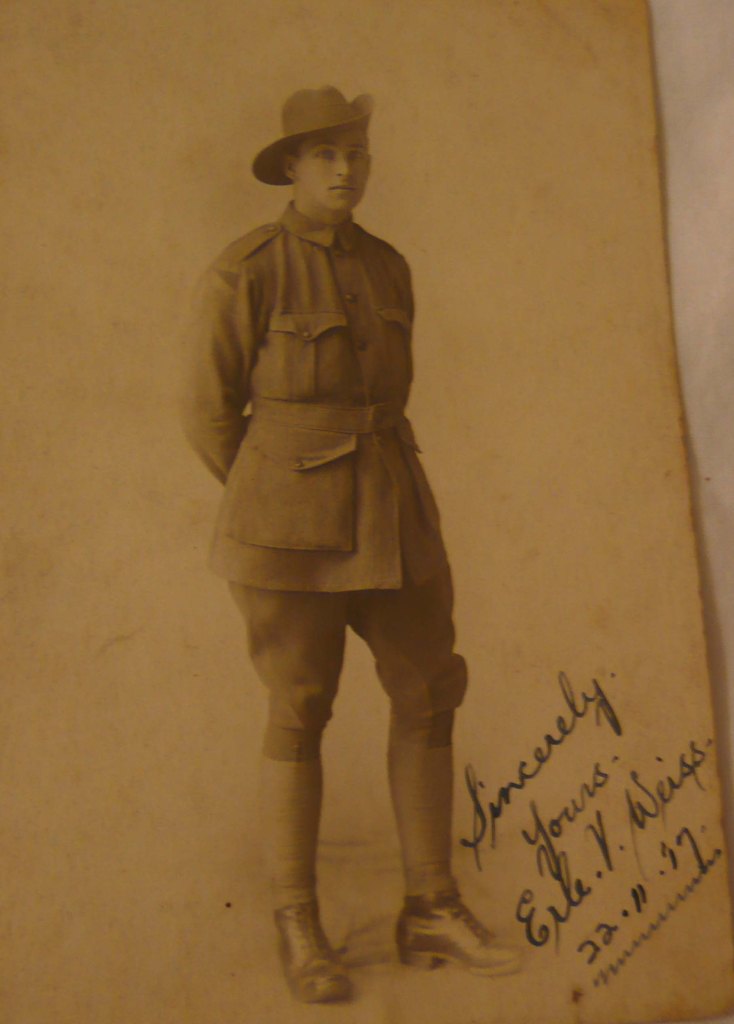 Among her collection is this photograph postcard from a young Australian soldier who was killed in World War I, Erle Victor Weiss. Erle was another of the young men, descendants of German ancestors, who fought for King and country in World War I. You will see from his note to his friend that he did not affiliate with the Germans he fought, referring to them as “Huns” in the vernacular of the time. Given the social attitudes of the era I often wonder whether those with German names felt they had to be more English than others, and whether it provoked them into joining up as soon as possible.

Erle had joined in August 1915 and was a bombardier with the 1st Field Artillery Brigade. He had been severely gassed in November 1917 and it was during this period of hospitalisation in England that he wrote to my cousin’s mother.

This postcard strikes me as a letter to a young woman with whom he was perhaps in love. Whether she was just a friend or reciprocated his love is unknown, though the fact that the postcard has been preserved all these years suggests she was very fond of him.

Erle was killed on 9 August 1918 nine months after this letter was written and is buried in Heath Cemetery, Harbonnieres. His brother, Frederick Alfred Weiss, died on 19 July 1916, in the Battle of Fromelles. These two young men were the eldest sons of Walter Henry and Amy Selina Weiss who lived at Erina, New South Wales where it seems Walter was a school teacher.

Erle’s friend, Norah, married another former soldier Leslie Gladstone Fisher in 1925 in Surrey Hills. Were the two men friends? Had they ever met?

It is impossible to read the files for the young men who were killed during the war: there is such pathos in each and every letter written to the authorities by their next of kin. All they had left to hope for were some items of their son’s to treasure, and in Erle’s case this amounted to 2 photos, 1 card, a belt a damaged wallet, a pocket book and a scarf. The significance of the war memorials, especially in Australia, is knowing that a memorial and small personal items were the only tangible reminders of their son’s sacrifice.

Among the photos are two unknown soldiers, I thought I would include it here in case someone else recognises them.