Our good friend Trove has done it again!

I mentioned in my East Clare post last week that I was waiting on a new release news story which looked tantalisingly optimistic. It’s now been released and has exceeded my hopes.

Regular readers will recall my excitement back in late December when I found a clue to my Mary O’Brien’s immigration in an advertisement for her sister, Bridget. Since the family’s oral history has them both arriving in Australia together I thought I’d hit the jackpot.

Hours of research online and in archives in Hobart, Sydney and Brisbane had left me none the wiser in terms of hard evidence, and if anything doubting whether even Bridget had come on this sailing ship. Nowhere was there a mention of her name and my hopes plummeted. I felt like the prince trying to make that glass slipper fit.

This new death notice and obituary once again opens up the research and reveals so much more. It tells of:

There is some oral history that suggests Bridget worked as a children’s nurse which would fit with the birth of Emily Church Broughton in Sydney in May 1858 and Mary B on 25 April 1860. This would tally with Bridget’s move to Cocketgedong especially if she had been working for the Broughtons in Sydney. She’d certainly have been well qualified in this role having been the eldest of the eight O’Brien children. The impact of women arriving in the district was among the subjects discussed in this interesting article in the Sydney Morning Herald of 11 May 1858[iv].

Of course the question remains why Bridget left Ipswich and her sister, having journeyed so far together. To the best of my knowledge there were not yet any relatives in Sydney. Perhaps she just didn’t like the Queensland heat and dryness. Certainly it can’t have been the isolation as Urana was far more isolated.

So here I am, back pondering the mysteries of the Florentia migration and again I’m left with the following questions.

All the oral history suggests the two young women came together. Annie Kunkel’s usually reliable information fits with what’s now known of the Florentia’s voyage. Furthermore I’ve re-read the notes I took at the time and see that she refers to them on an “old sailing ship”. I’d blipped over the “old” previously but it particularly fits with what’s known of the Florentia which had made voyages to Australia as a convict ship in earlier decades.

This question now seems to be answered. I have two different sources citing the Florentia which gives me confidence that Bridget at least arrived on that ship. It only had one voyage to Queensland, in 1853. Earlier ones to other states would have meant the women were too young to travel alone, so I’m now happy to place Bridget on this ship. But why is she not mentioned anywhere in the records?

I can find no evidence or mention anywhere that there were paying passengers on board the ship. It was an old ship and less likely to provide suitable cabin accommodation for anyone other than the captain and surgeon. However, is it still possible that it offered cheap paying accommodation to two young women? The records, as always, are focused on the assisted passengers and there was enough kerfuffle about the voyage that the assisted may have gained no recognition. Or am I clutching at straws?

As I mentioned I’ve looked at all available passenger lists for this voyage. There are no single women named O’Brien other than the daughters of Daniel O’Brien who I mentioned in the earlier post. I’d checked them out years ago because of the family’s on-going connection to Mary O’Brien and the Kunkel family. However, once again I married each girl off, and checked their deaths until I was sure none of them were actually our Bridget or Mary. Case closed there.

As implausible as this sounds it is not impossible. State Records of New South Wales (SRNSW) makes mention of it:One practice which frequently occurred during this period was the taking on of an alias in order to obtain passage. This happened in cases where passage had been denied under the correct name; in these instances, the assumed name was often the maiden name or the name of a person with whom travelling. In other instances, an immigrant assumed the name of a person to whom a passage certificate had been granted. An example of this is Joseph Golding who came in place of John Mahon. In these cases the lists usually record the person under his/her correct name with a reference to the alias (or assumed) name. (always assuming they actually came to light)

I’ve also found manipulated records, and impersonations, in the East Clare database I’ve built up, though they are only the ones which have come to light, as per the SRNSW examples above.

It seems logical that if the O’Brien girls had taken up other passengers’ tickets/permits that they’d (a) have to have been Irish and (b) most likely have been from Clare or nearby eg Limerick or west Tipperary.

I also eliminated from consideration single women whose married siblings or single brothers were on board, just because that would have required more extensive collaboration.

Similarly two young women in their mid-teens were unlikely to be able to pass themselves off  as women over thirty.

It really does defy logic, and Irish propriety, that the girls would have been languishing on the docks of Plymouth hoping to catch a ship to Australia until some other young girl(s) changed her mind about the voyage.

Over the past weeks I’ve been researching the single women on the Florentia.

Even eliminating the English and Welsh women from consideration there were still lots to investigate and I set to by looking at potential marriages via Queensland’s online BDM site. If I found one that seemed plausible I traced the death and compared the parents listed with those provided on the shipping lists.

Again and again I hit brick walls, often not even finding marriages at all. I also checked the NSW BDMs, just in case, because some of the immigrants had stated they had relatives interstate. Eventually I had to give this away due to the overall ambiguity, but if any reader had ancestors arrive on this ship I’d love to hear from them. 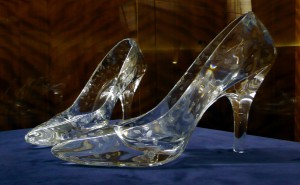 To be honest I’m still floundering, though I’m now much more confident that Bridget was on board the Florentia when it arrived in Queensland in 1853. However, was she an assisted or unassisted passenger? Did she/they come out under someone else’s name? There is a suggestion in the local history of Broadford that some young people were assisted to emigrate and perhaps that’s where the clues lie. Perhaps the girls came out as privately funded passengers but on a very old ship, with perhaps a cheap rate.

Frustrating as this is, without Trove I’d still have no clues about their migration as I’d exhausted other avenues many years ago. My gut feeling for some time has been that they came out as unassisted passengers so perhaps that was the case on Florentia.  I’m still walking around with that glass slipper in my hand looking for a perfect fit but will it ever happen? Digitisation has saved my research and perhaps will do so again.

Other posts on this topic:

Have I cracked it?

Was it all fun and games on the Florentia?

[i] Also known as Cocketygong, Cockegong from Trove reports. Cockejedong Creek was a tributary of Billybong or Biallabong Creek: Billabidgee, History of Urana Shire. Bayley, WA. Urana Shire Council 1959, page 59. For overseas readers, the word “station” here does not refer to the railway but an extremely large rural property. In American terms it would be called a ranch.

[iv] I was alerted to this by a reference in Bayley, op cit, page 22. Although not referenced in the book, Trove picked it up immediately when I searched by the phrase used.