We first met Frederick Charles Fisher in my previous post for the Trans-Tasman Anzac Day Blog Challenge. Fred was a handsome, imposing young man, tall and strong, and no doubt cut a fine figure in his uniform. 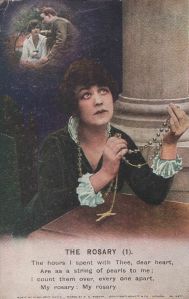 While he was serving with the 19th Battalion during the War, Fred obviously had an impact on this young lady. Was she his sweetheart or just a friend? With the rosary theme to each card, it seems likely she was also a Catholic herself.  It seems to me she was desperate to hear from him and perhaps never did. Did he break her heart?  Perhaps he just never got round to writing in the demands of battle and then it was too late. 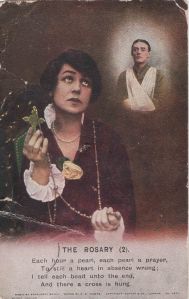 The tone of the letters makes it obvious she kept waiting for his reply, but it seems naive that you couldn’t understand why he didn’t write. Even allowing for the level of censorship it would seem obvious that many things might interrupt his ability to write back, or to receive letters, though plainly he did get these cards.

Had they met while Fred was in England on a furlough or while he was involved with the Championship of England run at Salisbury in September 1917?

His Aussie family know no more about Ena than is shown on these postcards to the Front.

And then there’s this “ring-in” among the Fisher family collection. Who was writing to Gaston Duhamel? Had that person promised Gaston to post him a letter while they were on furlough? Did the card never get sent? 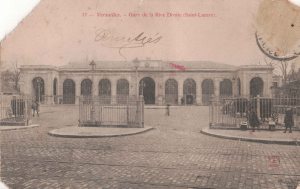