In the early months of 1915, two young brothers enlisted to serve their country in the First World War. It’s unlikely they felt they were going to fight to defend “home” and the “motherland” as their grandparents and uncles were German-born, not unlike my own Kunkel relatives. Perhaps they felt they needed to defend their allegiance to Australia and prove their loyalty as did other young men of German ancestry.

Frederick Charles Fisher was 22 years and 3 months when he enlisted with the Australian Imperial Forces (AIF) on 24 February 1915. He was allocated to the 19th Battalion, 5th Brigade. A motor mechanic in normal life he had also served with the Colonial Forces. His young brother Leslie Gladstone Fisher, 21, enlisted soon after on 2 March 1915, also with the 19th Battalion. Leslie had served in the school cadets and also with the 12th Battery of the Australian Field Infantry.

Les and Fred were the sons of Martin and Louisa Fis(c)her of 42 Rennie St, Paddington in Sydney. Martin was born in Australia in 1863 to Gottfried and Victoria Fischer who had arrived in Australia with their German-born children on the barque Caesar[i] in March 1855 under the Vinedresser Bounty Scheme[ii]. The Kopittke indexes, based on the Hamburg shipping lists, reveal that the family came from Harheim in Hessen/Nassau.

Les and Fred boarded the former White Star liner, HMAT Ceramic (A40), in Sydney and sailed for war on 25 June 1915, along with myriad other troops via Albany in Western Australia. On arrival in Egypt one of their shipmates, Ellis Silas, painted some lovely views while TH Ivers chose Bombay as his subject. While on board Les wrote to his mate Teddy Murray apparently yet to sail for war. I love the old vernacular like “bosker“. Lt Wilfred Emmott Addison (KIA) of the 19th has left a diary of the voyage which can be read here. Les Fisher’s daughter knows that he kept some form of diary himself but destroyed it years later after his return to Australia. 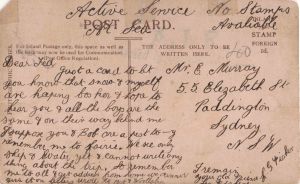 Like so many of the men, both fascinated and repelled by the sights, smells and sounds of Egypt, Les and Fred had their photos taken for posterity.

In many ways these men’s stories reflect that of so many other Anzacs. What’s unusual about them is that they left a photographic trail that has been lost to many families.  Also unusually their family preserved the records and Les at least shared his story with his children.

The photographs reveal the progressive story of their war. They included photos of mates they met, fought alongside, or furloughed with.

Below: Fred Fisher, Unknown and Les Fisher. The unknown man in the centre is believe to have been machine gunned. There is no date on this photo.

The Australian War Memorial documents that the 19th Battalion was sent to Gallipoli where the troops landed on 21 August 1915. “The Battalion participated in the last action of the August Offensive – the attack on Hill 60 – before settling into defensive routine in the trenches. From mid-September…the 19th Battalion was responsible for the defence of Pope’s Hill“.

As the months wore on and the weather changed, influenza became a high risk, along with frostbite as the men were under-supplied with appropriate winter clothing. Les’s daughter remembers that he talked of melting snow to obtain water to drink. You can read more about how the men dealt with life on Gallipoli beyond the fighting here.  The 19th battalion was withdrawn from Gallipoli at night on 19 December 1915.

Les Fisher’s casualty record shows he was taken sick on 14 December and admitted to Heliopolis Number 1 Auxiliary Hospital on 23 December 1915 with “mild frostbite”. Judging on Les’s annotation on the postcard it’s obvious the men called it Luna Park – a tongue-in-cheek nod to the eponymous amusement park in Sydney.

You can click on any of the photos to enlarge them.

After another period of training the men were despatched to France via Marseilles, disembarking there on 25 March 1916.

The AWM’s history again: The 19th took part in its first major offensive around Pozières between late July and the end of August 1916. After a spell in a quieter sector of the front in Belgium, the 2nd Division, which included the 5th Brigade, came south again in October. The 19th Battalion attacked near Flers between 14 and 16 November, in conditions that Charles Bean described as the worst ever encountered by the AIF.

Les’s fighting service was coming to an end. On 26 July 1916, he was wounded and admitted to 32nd Stationary hospital, Wimereux, France on 27 July with a severe gunshot wound to the right foot. He had copped what the troops knew as a Blighty, an injury which merited evacuation to England. Les was transferred via Boulogne on 30 July 1916 and admitted to Wharncliffe War Hospital in Sheffield where he was to stay for five months.

It is unfortunate that many of the Battalion’s War Diaries from 1916 no longer exist, but digitised copies of those that do can be found here.

This postcard was sent to Les Fisher by his sisters, Dorothy or Dorie (left born 1911), Alma (centre, born 1906) and Vera (born 1902). It says “God be with you until we meet again and Good Luck“. It’s dated 20 September 1920 which I have to think might have been a mistake as Dorie is certainly not 9 in this photo, so perhaps it was sent when the family heard of his injury, given its nursing theme. It was Dorie to whom Les gave his tiny bible which the men were given and which was carried in their breast pocket. 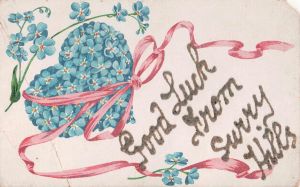 A few months later Les was transferred to 2nd Auxiliary Hospital on 18 December so once again he was in hospital for Christmas. A further transfer came in April, to Weymouth hospital.

Slowly Les’s injuries started to heal and he was given furlough in April 1917. His postcards show that he spent at least some of the time with Ned Kent from Victoria. I wonder where they went?

After returning from furlough Les was repatriated to Australia on board the Ayrshire in July 1917, and given an honourable discharge due to injury. His daughter has a copy of his certificate but unfortunately I have not scanned or photographed it, though I saw it some years ago.

The inscription on the reverse of this photo says: Monte Video Camp, No 2 Company, Weymouth, Dorset, England. 27-4-17. Note boot cut out for wound on foot, comprie (sic). His daughter said he often used this French expression meaning “understand” even though he’s mis-spelled it here.

On his return to civilian life, Les was no longer able to follow his hope to become a police man like his uncle. The injury to his foot had put paid to that aim, and he went to work at the Sydney Victualling Yards. Les would wear a surgical boot for the rest of his life, and receive regular treatment at the repat hospital.

The family must have been pleased to have one son back at home, but older brother Fred was still serving in France. He would not return until 1919 and the family turned on quite a celebration for him at their home in Lenthall Street, Kensington (Sydney). Fred Fisher is pictured bookmarked by his parents and his brother Les is in the background with girlfriend Norah Keane. Many years later a relative approached the new owner of the property to see if they could look inside the house, and there on the wall was this photo -the new owners had always left it hanging in the hall.

Les and Norah would marry and raise a family. Although Fred also married he had no children. The men would live in adjacent houses in Snape Street, Maroubra for the rest of their lives.  Leslie Gladstone Fisher died in 1956 and Frederick Charles Fisher died in 1937.

This post is my contribution to the 2014 Trans-Tasman Anzac Day Blog Challenge hosted by Seonaid from Kintalk blog in Auckland.

[i] For those interested in this voyage, which resulted in the deaths of 66 passengers due to cholera, this website includes a letter from the doctor on board. http://ubrihienfamilyhistory.webhive.com.au/ship-caeser/