This post was inspired by this week’s Sepia Saturday theme of “I am asking you to feature your tributes to all of those who are keeping us safe at the moment by featuring your old photographs of carers of all types and all times”. Admittedly it’s now more Sepia Monday but I wanted to include my discovery of workers who supported the Spanish Flu in a suburb near where I grew up, and near where my grandparents lived at the time. I have no doctors or nurses in my own history from this time so I turned to my good friend Trove.

May 1919 seems to have been the hot-spot of infections although at this time, the deaths seems small compared to what was experienced globally.

Soon after this, the suburbs or town Councils started to take action to support the community as people fell ill. 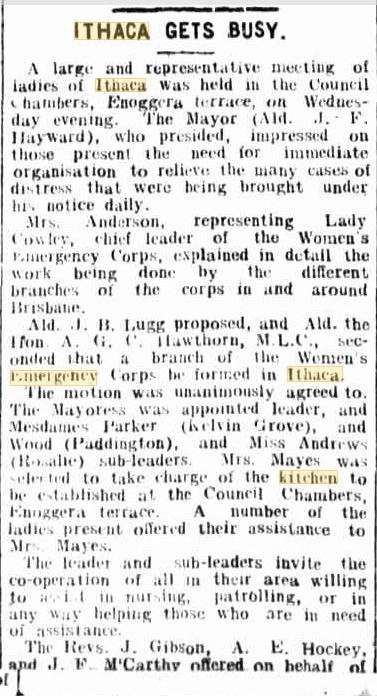 Meanwhile activity in neighbouring Enoggera gives a sense of what was happening at the grassroots level.

The summary on this photo explains: A large crowd of people who were working as volunteers during the influenza epidemic. The group includes, doctors, nurses, ladies and schoolchildren, pictured outside the Ithaca Women’s Emergency Corps kitchen.

The State Library of Queensland provides this summary and explains the signs held up by the boys on the window sill: Volunteer workers outside the Ithaca Town Council Chambers during the influenza epidemic of 1919. The Brisbane area experienced an outbreak of influenza in May 1919 and it spread through hospitals in the area. Isolation huts were erected at the Brisbane Exhibition Grounds to cope with the epidemic. Cards were issued by local authorities which could be put in house windows if people needed help. SOS for doctors and FOOD if needed. (Information taken from: Town of Ithaca Mayor’s Report, 1919, p. 6.)

Rather foolishly I hadn’t considered what the Spanish Flu Influenza meant to my ancestors who survived and who apparently remained well. They resided in the spread between the Ithaca Council Chambers (marked Ithaca Hall) and the Brisbane Exhibition Ground (blue marker), which was the influenza evacuation point. My grandfather hadn’t returned to his residence in Bally St from World War I until August 1919. His wife-to-be and her elderly mother and siblings were all living at Guildford St (red marker), fairly close to Ithaca Town Council Chambers. I wonder if we’ll ever know how the Influenza Epidemic may have affected them or their livelihoods. It’s made me realise that I need to research the impact of the epidemic on Townsville where my other grandparents lived. I already know from Trove that my great-grandparents’ house in Hughenden became an isolation hospital.

How much more sedate do things look a mere year later at the Ithaca Town Council chambers.

This image is from a Sydney suburb in New South Wales but it is visually evocative of the current situation. 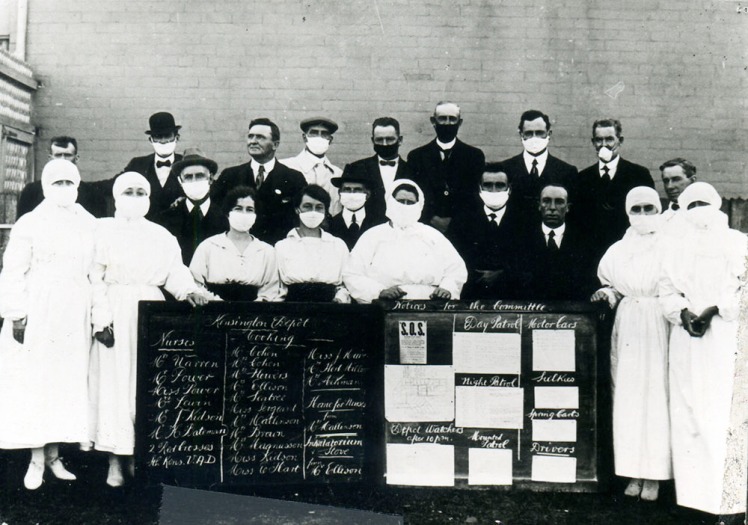 Image shows the influenza team at the Kensington School of Arts during the influenza epidemic of 1919. With the team is a blackboard listing the nurse, cooks and others on the team. Randwick City Library https://randwick.ent.sirsidynix.net.au/client/en_GB/search/asset/15848/0